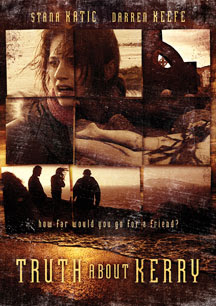 This indie film set in Ireland casts the lovely Stana Katic ("Castle" & "Quantum Of Solace") in the lead role, and she shines well. Portraying Emma, an American whose best friend was mysteriously found dead in Ireland while on vacation, Katic herself becomes entangled in the small Irish fishing village's secrets. She singlehandedly sets out to solve her friend's death, meeting a series of locals who point her in confusing directions. As well, she befriends a bartender who gives her support, as well as plenty of Guinness and whiskey shots.

It's a solid film, well-shot and scripted, though some of the locals seem slightly wooden in their deliveries. As stated before, Katic is wonderful in her role, and the scenery is breathtaking. Director Torpey spins a fine mystery without much glitz nor glitter, but plenty of heart. This is a fine indie film worthy of a look. (Video Services Corp via MVD Visual)

Posted by Goatsden at 7:02 AM No comments: