This ultra low-budget horror-comedy is, thankfully, as tongue-in-cheek as the title blatantly proclaims. It won't go down as a classic in anyone's book, but it is chock-full of tacky dialogue, snappy one-liners, flat acting, and tasteless redneck jokes. Yes, there are bean-eating fart contests, window peeping, tripe-eating, beer drinking, strip pokering, cat-shit eating, and shotgun-toting moments strewn throughout this one, alongside the usual genre staples (extravagantly over-the-top gore and some rampant breastiness). The storyline, you ask? Well, I say, "Does it matter"? Let's just say that a sexy vampiress mistakenly chooses a deep-Southern hillbilly backwoods town called Backwash to start a vampire colony. Soon, the kinfolk are infected, and all manner of wacky hijinks ensue, as you can imagine. Bad accents, bad vampire teeth, and buckets of blood.

I admire the tenacity it took to realize this film, but it seems to go on far too long. Maybe more editing would've made this one a mite more palatable. Kudos to the diminutive Cletus (played by Bill Bradford), who steals the show and is easily the most convincing and charismatic of the actors. If good, ultra-trashy B-movie fun is your thing, look into "Inbred Redneck Vampires". I'll stick with "Redneck Zombies" myself. (SRS Cinema
via MVD Visual)

Posted by Goatsden at 1:38 AM No comments:

A Forest Of Stars - "Opportunistic Thieves Of Spring" CD 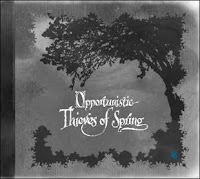 This English quintet get really liberal with their black metal inspirations, and they are gifted a rare treasure missing in at least 99% of the scene -- a sense of humor! The band's website is a beautifully artistic recreation of a 19th century "Gentleman's Club", complete with books the visitor can "leaf" though, moveable desk props, and Daguerreotypes of the band members as they "were" in 1890. Certainly refreshing in a sea of "too dark for thou" corpse-painted po-faces.

That said, musically, A Forest Of Stars don't refer to that era at all. They exhibit the screeching speed riffs and unintelligible vocal roar of the usual black metal, but the addition of flutes, strings, and symphonic elements is a welcome addition. "Sorrow's Impetus" opens with a maelstrom of harsh black metal and swirling psychedelia - a mix that works quite well. "Summertide's Approach" could be a medieval Tool or Isis, even, if either of those bands utilized violins or flutes in their respective lexicons. "Thunder's Cannonade" churns with a doomy seriousness, and the moody "Starfire's Memory" falls away to reveal a darkened soundtrack of thunder and cavernous noises. The closer, "Delay's Progression", begins as a light synthesizer soundtrack before sharpening the blade and ramping it up to a 16-minute progressive-metal epic. Solid and bewildering work here, melding genres almost as wildly as a Mike Patton-related project. (Transcendental Creations)

A Forest Of Stars site 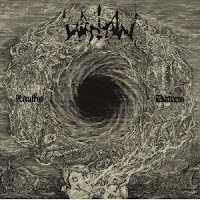 Sweden's Watain have quickly ascended to a leading position within the insulated and stagnating black metal scene. "Lawless Darkness", their 4th album, further cements the band's malevolent throne. Watain aim exponentially higher (or is it lower?) than their brethren, and "Visible Darkness" is a masterpiece of terror and unrelenting darkness. It's a charred, fiery blast furnace of bleak and impenetrable heaviness that may end up redefining the genre.

Purists have criticized "Lawless Darkness" for sounding like traditional metal ala Motorhead (maybe true somewhat on tracks like "Reaping Death" or "Total Funeral"), therefore bastardizing the sacred "black metal" genre. I say hogwash. On the contrary, Watain have singlehandedly advanced the scene with their melding of classic metal inspirations (just listen to some of the guitar solos here), furious cut-throat aggression, dark mood and melody, and, last but not least, a crisp, punchy, and thunderous production (sorely lacking in a lot of the genre's stalwarts).

The intensity never wanes, from the opener, "Death's Cold Dark", through the bold instrumental title cut, and all the way to the stunning end. The surprise guest vocal cameo on the closer, "Waters Of Ain", by Carl McCoy of occult-rock act Fields Of The Nephilim is mostly token, but it does emblazon Watain's sincerity and genre-crossing fearlessness. Vocalist Erik Danielsson has stated that this contemplative 14+ minute finale is the soundtrack to his own demise. And true to black metal tradition, this rollercoaster of emotive texture, quiet contemplation, and enraged bombast is wholly appropriate. There are elements of intense sorrow, poetic depth, and fiery resolution. It's a powerful and truly magnificent tour-de-force.

Limited editions of the album include a bonus track, a furious cover of the Death SS song, "Chains Of Death". It's a worthy addition to the album, and brings it all to a brilliantly epic 80 minutes. "Lawless Darkness" is essential to any fan of modern metal, and may well bring the essence of black metal to a whole new audience. (Season Of Mist)

Temple Of Watain site
Posted by Goatsden at 9:13 PM No comments: