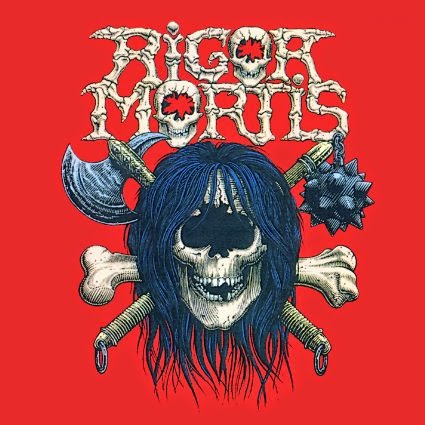 The legendary debut album from Texas’ infamous thrash metal innovators has been at last reissued, with an added bonus track for fans (the punk-tinged “Spivey”). Originally released way back in 1988, Rigor Mortis (whose members would later go on to further notoriety with bands like Gwar and Ministry) dared to fuse ultra-speedy thrash metal with their gore movie fascination. Tracks like “Wizard Of Gore” or “Re-Animator” hold their inspirations proudly on their sleeves, and they obviously had a lot of fun doing it. Kudos for not taking themselves too seriously.

Coming around at roughly the same time as Slayer, Rigor Mortis mined much the same territory, never receiving quite the acclaim as their Bay Area brothers, but producing at least as heavy a din. Production on “Rigor Mortis” is clean, thanks to Skinny Puppy producer Dave Ogilvie’s mix, but the real treat here is the band’s skill at lightning-fast, yet clean instrumentation. Vocalist Bruce Corbitt has a raspy growl, but it never gets to the point of going all “Cookie Monster”, and guitarist Mike Scaccia had some of the speediest guitar riffs I have ever heard. This is old-school thrash metal, pure and unadulterated, and one of the genre’s most beloved templates.

Unequivocally a big influence on many a death metal act, Rigor Mortis’ debut is a recording that may not get it’s full due, but certainly has a place in many a metalhead’s heart.

official Rigor Mortisbook
Posted by Goatsden at 11:28 AM No comments: 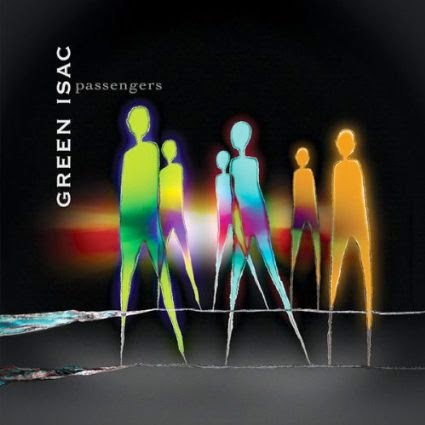 Norwegian duo Green Isac have been producing worldly, ethno-tinged electronica for some time, but “Passengers” is their first release in 10 years. It all begins with the Eno & Hassell-inspired “Ormen Lounge”, which is a subtle, mysterious piece with trumpet. That piece flows into “Particle Talk”, which is a pulsing ambient piece with sounds evoking a Middle Eastern radio transmission intercepted and placed atop a bed of smooth shuffling beats. Very nice, transformative, and evocative indeed!

The remainder of the album continues in this path — inspirations from around the world are woven seamlessly into Green Isac’s smooth electronic ambience. “CSA” even draws in some synth pop to their web, and it works well. “Zakopane” brings an air of futuristic mystery, manipulating more Middle Eastern sounds around a bed of subtle synthetics. “Na Tariko” could be a less angry Muslimgauze, whereas “1034” is a reflective, haunting slice of piano and electronics.

All said, “Passengers” is a superb, warm, and invitingly subtle album that weaves together world influence into a modern sound travelogue.

Green Isac site
Posted by Goatsden at 10:53 AM No comments: 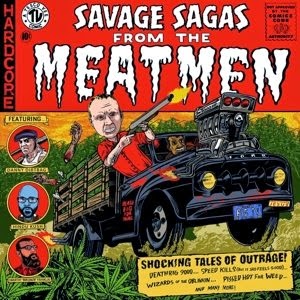 Ugly, dirty, and ultimately great return from Tesco and friends!

The immortal Tesco Vee and compatriots are back with their first Meatmen album in 5 years, an the first of all new material in over 20! “Savage Sagas” doesn’t tidy things up neatly for the kids, though. Nope, it’s as offensive, raucous, and out of control as ever before. With such family-friendly tunes as “Pissed Hot For Weed”, “The Ballad Of Stinky Penis”, “Big Bloody Booger On The Bathroom Wall”, or “Rock ’N Roll Enema”, you know it’s gonna be fast, hard, and ugly. And it is.

“Men O Meat” opens it all up with 55 seconds of speedy garage punk. “I’m Gonna Fuck You Up” is an anthem of only a minute and a half. Yikes! Tesco, Danny Dirtbag, Hindu Kush, and Bun Length are certainly firing on all cylinders. Production is perfect — raw but clear, and these 20 songs turn in at a quick and bouncy 48 minutes. “Shecky Presents…” is a bit of a comedic interlude, but fear not, kids, as “Speed Kills (But It Sho’ Feels Good)” is a thrashy, metallic punk monster. This one takes me back to the classic days of hardcore punk — with all the subversive nihilism and attitude. I will never tire of this sound. All hail the Meatmen! 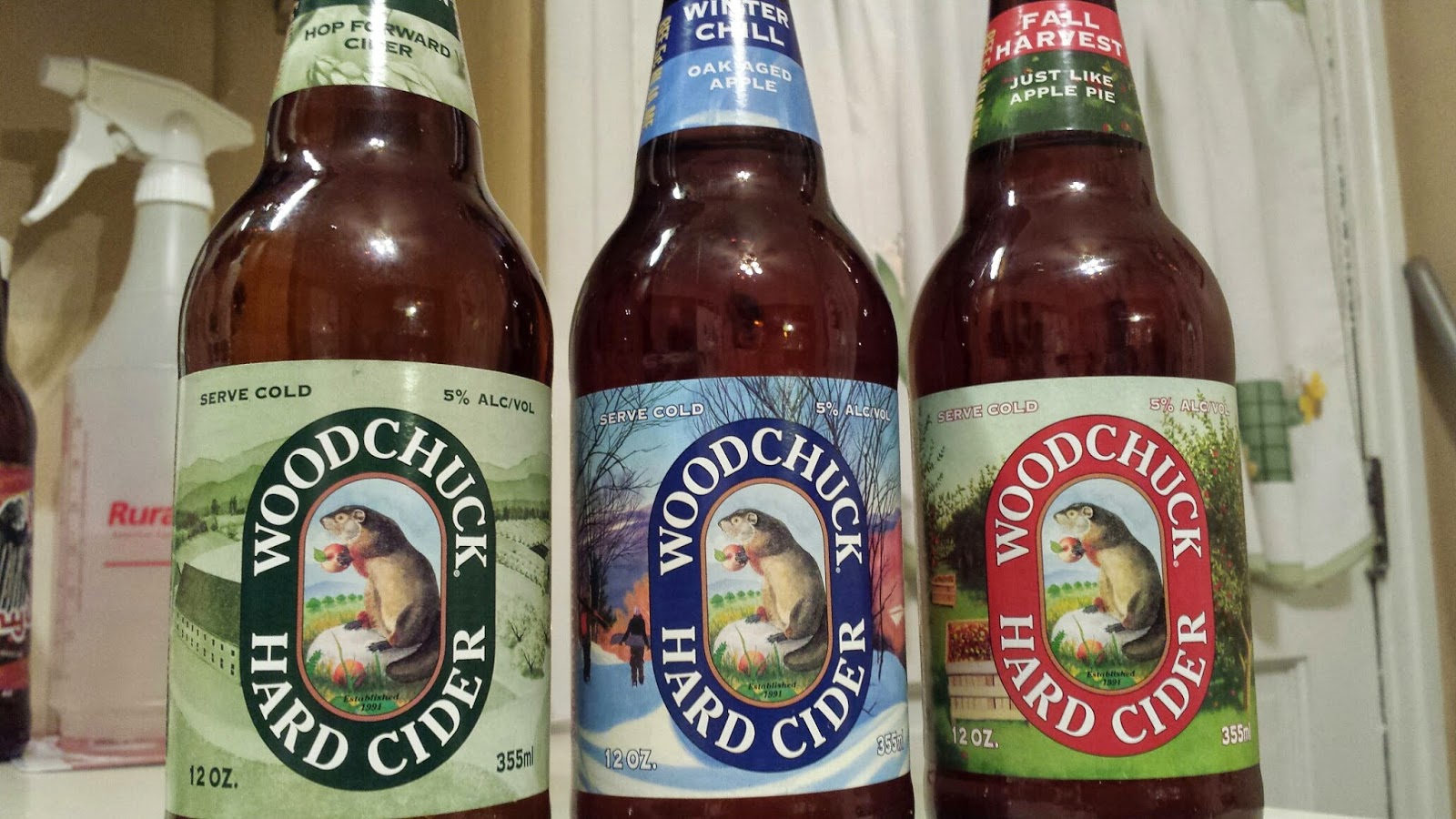 So we here at Goatsden are sort of known for enjoying a good beer now and again (and again, some would dare say). But, in the interest of NOT being snobbish or in any way clique-ish, we thought it high time to review some other spirits. And what better way to celebrate the snowfall in Fall as to review some new ciders?

Woodchuck (based in Vermont, USA) is probably the best-known cidery on this side of the Atlantic. And for good reason. Their distribution is amazing, and their ciders are all solid and well-balanced, at least by Goatsden standards (say no more). This review is of three specialty Woodchuck ciders, either seasonals or new varietals. On with the tasting, shall we?

Hmm, this is a nice collision of tastes, and it works better than you’d expect. It pours a very pale complexion, with a pleasant floral aroma. The grassy, citrusy, piney Cascade hops blend well among the sweet apple. It’s a subtle mix here, not overwhelmingly hoppy, but with a distinctive flavor I've not had before. Mrs. Goatsden says this one tastes more “beer-like”, and she’s spot-on. It’s balanced, tasty, and one I’ll be seeking out again.

This one is a mellow blend, with the cider being aged in French and American oak. Winter Chill brings a subtle vanilla accent to the apple — but it’s subtle, and there isn’t a lot of the oak character otherwise to detect. Nonetheless, this one is among my favorites from Woodchuck’s fine line.

Filled with plenty of Fall spices (cinnamon and nutmeg), this tasty and sweet cider has a hint of heat from the spices to accent the sweet apple character. I really liked this one, but can see why it will be a favorite among fans of apple pie or generally sweet drinks.

Woodchuck
Posted by Goatsden at 2:03 PM No comments: 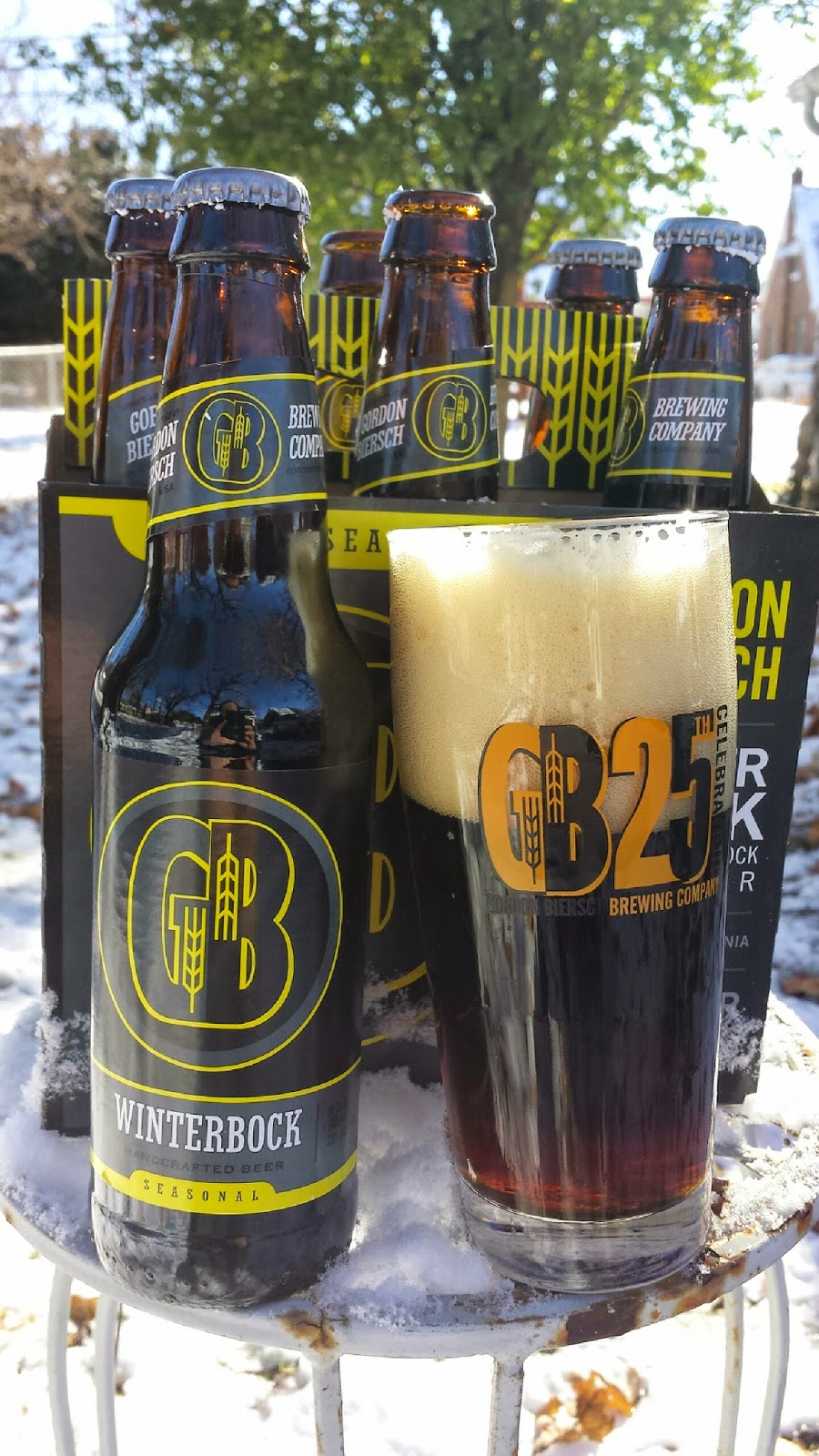 San Jose-based brewery/restaurant chain Gordon Biersch isn’t distributed in Indiana, but I was able to score some samples for review thanks to Colin at Emblem PR. And what samples they are! Biersch brews exclusively classic German-styled beers, so for the cold season ahead, we at Goatsden were delighted to get some bottles of Gordon Biersch’s Winter Bock for tasting.

Pours a deep caramel amber with a heaping head of of-white carbonation. I get spoke-like, spiderwebby lace on my GB25 glassware. Great appearance!

Nose is caramel malts, some spice, and nice sweet roastiness.

Taste is, again, very much a roasty, malty, semi-sweet melding of dark malts, with a chewy caramel or toffee character dominating. There’s also an element of nuttiness in the flavor, which is perfect for a chilly snow day. This is everything a solid doppelbock should be. The body seems a tad light, but the flavor does not suffer. A solid drinking bock, and at a strong 7.5%, this is a deceptively enjoyable brew. Bravo!

Gordon Biersch site
Posted by Goatsden at 1:32 PM No comments: 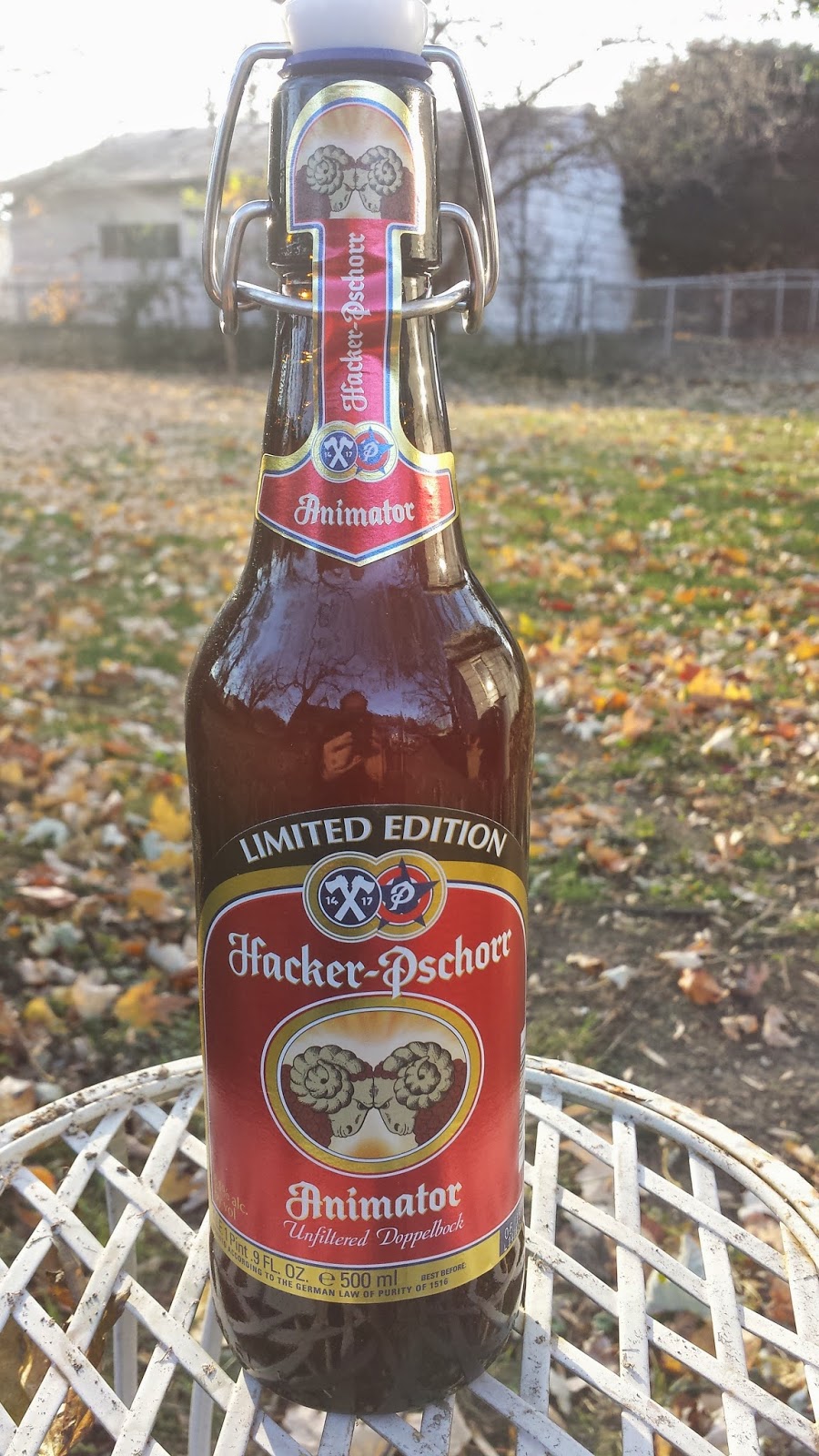 The final brew in Hacker-Pschorr’s limited seasonal series of 2014, this is a classic doppelbock straight from Munich, and apparently is available for the first time in North America this year, albeit in very limited quantities. I’d recommend picking this one up if you do see it out and about.

Pours a cloudy, hearty amber with crimson highlights, and a thick head of fine off-white carbonation Virtually no lace here, though!

Taste is rich, malty, and sweet, again with hints of toasted malts and dark, dried fruit and toffee. The thick malt profile gives way to a light, hoppy zing of bitterness at the finish, and I do detect a slight alcohol heat as well. Overall, a delightful and world-class doppelbock that’s packed with complexity and drinkability despite the high 8.1% ABV.

Hacker-Pschorr site
Posted by Goatsden at 8:05 AM No comments: