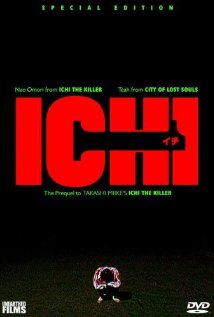 This 2003 Japanese prequel to the classic "Ichi The Killer" is less horror, more bloody, street-fighting action film. And it works just fine. Subtitled in English, "Ichi" is based on a popular manga comic series, and is a tale of Shiroichi -- a soft spoken, backward wuss who "gets off" on watching violent street fights. Yes, you read that correctly. He gets hard-ons (and more) while watching people get beat-downs. Well, Shiroichi (aka Ichi) gets bullied and beaten himself for his passive ways , and before long, his rage builds. When he finally releases his internalized anger, he annihilates an entire street gang, murdering everyone in a bloody rage.

Along the ride, we see rival fighters attempting to one-up their "schoolmates" in bloody, violent fist-fights, oftentimes vying for the attention of the squealing schoolgirls. Ichi is always on the periphery, never wanting to take part in the fights, but when he does, it's quite a blood-bath.

"1-Ichi" isn't a brilliant film, by any means, but it is a fun and ultra-violent romp (with elements of humor) that could only come from Japan. I liked this one.

(Unearthed Films)
Posted by Goatsden at 3:51 PM No comments: 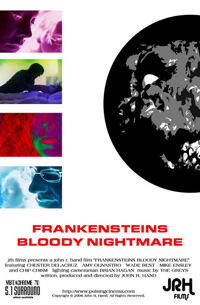 Directed, produced, and starring John R. Hand, this 2006 psychedelic swirl of abstracted horror was a unique debut, shot entirely on vintage Super-8 format (with an annoying abundance of color-saturated filters). On one hand, I admire Hand's attempt to produce a disorienting experience akin to some of the experimental filmmakers of the seventies.

On the other hand (hah, no pun intended), "Frankensteins Bloody Nightmare" is a messy, scattered film. Loosely based on Mary Shelley's classic novel, this modern adaptation is a tale of a young doctor who decides to reanimate his dead girlfriend in the obvious fashion (i.e. with dead body parts). The dialogue here leaves much to be desired, and the "monster" looks more like a Muppet frog. In truth, "Frankensteins Bloody Nightmare" is almost unwatchable, but I can see the raw ideas that Hand brings to the table, and there's something there. I can't recommend this, but the director may be one to watch in the future.

JRH Films blog
Posted by Goatsden at 3:25 PM No comments: 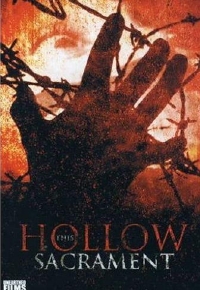 Part of the "Bloody Evil" bound budget 4-pack (often a quick sign of trouble), this cheapie micro-indie has so many issues, I don't know where to begin. It's a serial killer flick, completed by flat, robotic soap-level acting, casting issues (why is the supposed 13 year-old about 30-ish?), and a generic script. An ex-soldier, now a detective, is hot on the lead of a slayer of young women in Northern California. And, get this, it's "based on true events". Stop me if you've heard this one before...

Compared to the serial killer mainstays ("Se7en", "Henry: Portrait Of A Serial Killer", "Silence Of The Lambs"), this one seems just plain mild, and even playing safe. The gore, while prominent, is cheesy and forced, even. I dunno, but this one lost my interest really quickly and never got it back. Unearthed FIlms needs to bury this aimless cheese-fest back in the litter box, where it belongs.

(Unearthed Films)
Posted by Goatsden at 2:30 PM No comments: 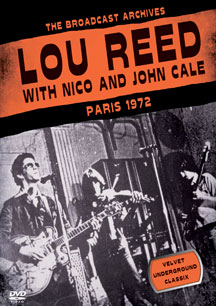 Filmed for French TV, this quick VHS-transfer of dubious origin is a superb history piece, and contains some fine music. Trouble is, "Paris 1972" runs well under a half-hour in total, is of poor-to-fair quality black & white, and has issues with the audio going out of synch with the video. Haphazard, yes. Historically valid, yes.

It's great to see newly-solo Reed reunited with his old Velvet Underground bandmates, including the marvelously beautiful Nico and the studious Cale, and although the quality of this release leaves something to be desired, it's still a worthy document, and a must-see for serious Velvets fans.

Posted by Goatsden at 2:13 PM No comments: 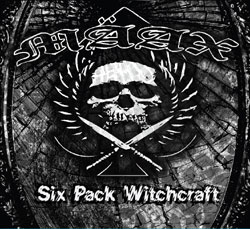 5 songs and 14 minutes of rolling black thrash metal thunder from an Indiana group. This EP was originally released in 2010, and the band have since realized a full-length LP, which I've not heard. Regardless, this is a solid piece of evil metal madness.

The opening cut, "Die By The Ax" is a beast of unbridled mayhem, with witchy vocals and a tough thrash exterior. Imagine if Motorhead careened headfirst into Darkthrone, and you'd be close to Maax's ferocious sound. The other cuts, including the blurry and subtle "Go Fuck Yourself", echo this sentiment. The title track is a pure drunken punk/black metal crossover that is as dirty and smelly as can be, which is a good thing. The only thing holding up this brief EP is the muddied mix, in which the lower end seems bottomed out. Nonetheless, these guys bring it in an authentic way. 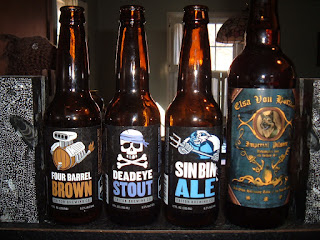 Here are some Indiana-based small brewers, all of whom are producing some fine bottled brews. Distribution for these may be small and regional, but if you end up near Indianapolis, Indiana (Triton) or New Albany, Indiana (near Louisville, Kentucky, for New Albanian), do not hesitate to stop in and enjoy a pint!

Triton is a new Indy brewery now producing bottled 6-packs. I love their graphic style -- stark, colorful, and distinctive. And their beers are pretty damned good, too.

Pours a deep ruby in color, with a pleasant head of off-white foam and loopy 2-finger lace. Nose - sweet & malty, with touches of toffee, maple and roasted nuttiness. Very in tune with Fall. Flavor is caramel-nutty malts, with a slight hint of citrus hops to round off the finish.

This brown ale is nicely balanced and quite enjoyable.

Pitch-black and opaque black upon pouring, with a deep tan head. Not much lace to speak of. Nose is creamy bittersweet chocolate, with an underlying caramel vibe. Unusual and appealing! Taste is plenty of the bittersweet chocolate, burnt coffee, and more of the caramelized sugar. I also get a good sense of the oat infusion, as this one is smooth, and almost milky/lactic in texture. Surprisingly different with the sweet/sourness. Enjoyable.

This Belgian-style pours a clean amber, with medium head. I get slight lace, but not very showy in presentation.

Nose is mildly spiced. I don't get a lot to go on here. Taste is, as before, spicy and warm, with a bit of hoppiness complementing the malty character. Hints of fruit are here, too, and this one's a cool amalgamation of a Belgian and a pale ale. Not bad, but not one I'd revisit.

New Albanian has distributed locally for a few years, but unfortunately it's all in larger (somewhat overpriced) bombers. Here's a friendly nudge for them to make some of their killer brews in smaller 6-packs for those of us without much disposable income.

This Imperial Pilsner pours from the bomber semi-cloudy golden, with a thick and sudsy head. Stunning and boldly detailed lace cascading down the glass. Beautiful. Nose is grainy and lagery, with a hint of floral hops. Nice.

Taste is malty and lagery an first, followed by a nice, heavy dose of floral hops. Faintly bitter upon tongue at finish. The heavy alcohol presence (a whopping 10%) is masked quite well by this delicious and well-hopped pilsner. Delicious and well-done.
Posted by Goatsden at 5:14 PM No comments: 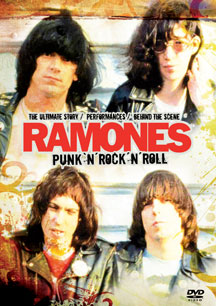 Ah, the greatness that was the Ramones, here captured on DVD of dubious origin. But no matter, this short (19 tracks, but well under an hour in total) set includes old TV appearances (one recognizable source is England's Old Grey Whistle Test), and the band were in fine form, indeed.

Sure, it's nowhere near HD in quality, but who needs that window dressing? The rawness here is fine with me, as the band (in their prime) pummel through greats like "Blitzkrieg Bop", "Now I Wanna Sniff Some Glue", "We're A Happy Family", "I Wanna Be Your Boyfriend", and tons more. As mentioned before, this is a shady set of quick-transferred TV appearances, and the "Biography" is nothing more than a few paragraphs of text on-screen with a quickie band history, but (gabba gabba) hey, it's not rocket (to Russia) science. Cool stuff, and you can't discount the quality of these performances, regardless of the medium.

Ramonesworld (official site)
Posted by Goatsden at 4:52 PM No comments:

Bob Dylan And The Band - "Down In The Flood" DVD 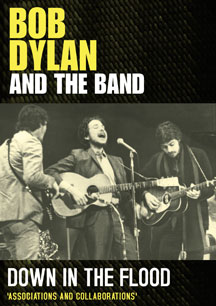 This documentary details the 1966 tour pairing Bob Dylan with arguably Canada's finest rock act (and the template for the Americana scene today), the Band. As with previous Sexy Intellectual releases, the usual panel of experts, bandmates, and journalists dissect the era when Dylan's electric rock both shocked and infuriated his folk-leaning fans.

There's a wealth of rare live and TV footage here, as well as plenty of photos and visuals to illustrate the amazing collaboration between Dylan and the great musicians of the Band, and what it meant to rock then and now. Despite an exhaustive 114 minutes, "Down In The Flood" is essential for serious Dylan-philes.

Bob Dylan site
Posted by Goatsden at 4:50 PM No comments: 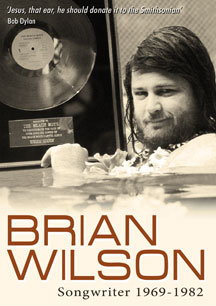 By most critics and fans' accounts, Brian Wilson was the Beach Boys' guiding light and innovator. His influence and inspiration led the band through their heyday in the early 60s, before he fell victim to his own personal demons, and alcohol and drugs. This unauthorized documentary looks at his later years, when the band was splitting due to internal pressures, and when the explosion of the late 60s underground music scene made the upbeat, pop-oriented sound of the Beach Boys seem irrelevant and safe.

As with most of Sexy Intellectual's releases of this nature, historians, journalists, and former bandmates are interviewed, and that input, placed beside plenty of great period films and photos, makes this an eye-opening experience. It seems Wilson's more experimental needs didn't gel with other band members, who saw the group as basically an "easy money" pop vehicle, whereas Wilson wasn't happy re-visiting the past. His checkered path has been met with both skepticism and admiration, and it's great he's getting his due now. Now, if only Mike Love will let him back into the band! Hah! (Sexy Intellectual)

Brian Wilson official site
Posted by Goatsden at 1:23 AM No comments: 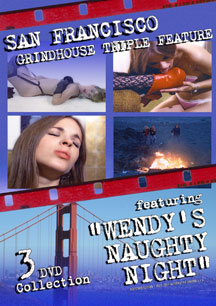 First was "Wendy's Naughty Night", directed by Nick Philips (who, oddly, went on to direct horror later in his career). This 1973 skin-flick was hippie hardcore at it's not-so-finest, complete with weirdly whimsical musical soundtrack. This one was a weird tale of damaged, but free-spirited Wendy, who supported an deadbeat artist boyfriend, but loved to frolic in the sack (when not with her therapist reminiscing about her lesbian inclinations). As it is, "Wendy's Naughty Night" is a mess, with flimsy plot, very little dialogue, and awful acting. And the action was nothing to remark about, either.

"Siv, A Swedish Girl" was also the work of director Philips, and despite a mismatched audio track (bad overdubbing), this 1971 hardcore features a trippy psychedelic jazz soundtrack. Definitely a period piece, "Siv" is forgettable at best, with most of the "action" being mostly nude writhing. Poetic voiceovers are hackneyed, with amateur imagery and silly effects. Other adjectives I'd use to describe "Siv" are haphazard and disjointed. The murder-suicide "climax" is absolutely unexpected (and, I"m sure, off-putting to period moviegoers who simply wanted a good time), and certainly points to director Philips' future in horror, but it doesn't change that this is simply a bad movie.

Attached to the disc with "Siv, A Swedish Girl" are a series of Joe Sarno trailers, which fare much, much better. Seventies gems like "Butterflies", featuring the amazing Marie Forsa, are previewed here. The great sets and cinematography in these trailers make the feature-length films on this set look just heinous!

All-in-all, some pretty forgettable work, and worthy only as a time capsule of the early-to-mid-seventies scene.

Posted by Goatsden at 1:19 AM No comments: