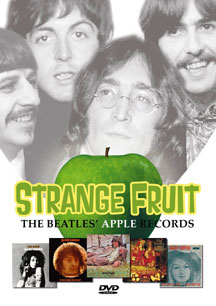 In their sixties heyday, as the Beatles were riding a wave to the top of the charts, they (and their management) decided to begin their own "artist-centric" record label called Apple Records. As an unauthorized documentary of the legendary label, this 162-minute DVD is absolutely essential for fans.

Detailing now-obscure releases by names like Elephant's Memory, The Iveys, and Paul McCartney protege Mary Hopkin, as well as better-known releases by Badfinger and James Taylor, "Strange Fruit" includes interviews with experts, journalists, and the musicians themselves (though actual Beatles member interviews are not featured). Individual albums are dissected, and the involvement from McCartney, George Harrison, John Lennon, or Ringo Starr are noted.

This is a fascinating and exhaustive look at the golden era of the Beatles and Apple  Records, and I applaud Chrome Dreams for this superlative release.

Beatles official site
Posted by Goatsden at 6:44 PM No comments: 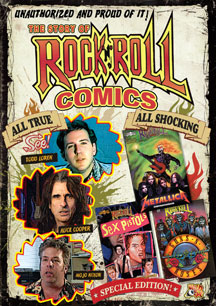 If you grew up in the 80s or 90s, you may remember "Rock 'N Roll Comics". This upstart underground publishing company produced a shit-ton of unauthorized rock biographies in comic book form. The company, founded by Todd Loren, kindled the ire of many of the featured bands (or more specifically, their merchandising and management companies).

This documentary covers the little-known life and times of Loren, from the beginning of his dealings in the music business with rock memorabilia company Musicade (who I'm pretty sure I used to order from) to his short-lived Rock 'N Roll Comics venture. Loren was an incendiary character, with little business acumen and, according to some of the friends interviewed here, even fewer social skills. Loren was found murdered in 1992, in a case still unsolved.

"The Story Of Rock 'N Roll Comics" features interviews with many of Loren's colleagues, friends, and family members, as well as names like Alice Cooper and Mojo Nixon, both of whom were supporters of Loren's free speech cause as he battled rock giants like Guns 'N Roses, Bon Jovi, or even New Kids On The Block, in court. It's an engrossing look at one of America's underground comics' "dirty little secrets".

Posted by Goatsden at 6:30 PM No comments:

Pankow - "..And Shun The Cure They Most Desire" trailer 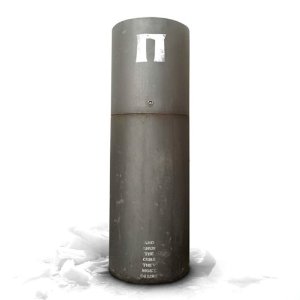 I am excited to report that my favorite forgotten Italian electronic/industrial rock act PANKOW has a new double-CD release, out in America on Metropolis Records (and Out Of Line in Europe). "..And Shun The Cure They Most Desire" features plenty of new tracks, most with new vocalist Bram Declercq. Original vocalist Alex Spalck (who also wrote most of the lyrics) returns for several tracks, as does Paulo Favati, who is legendary for his productions and remixes. Disc 2 is a set of new remixes of classic Pankow cuts like the immortal "Me And My Ding Dong", "Sickness Taking Over", and "Gimme More". Check out this teaser sample of the band's new material. It's a nice throwback to their classics from the late 80s and early 90s. Long live Pankow!

Posted by Goatsden at 2:10 PM No comments: