"Beyond The Pale - The Story Of Sierra Nevada Brewing Co." by Ken Grossman 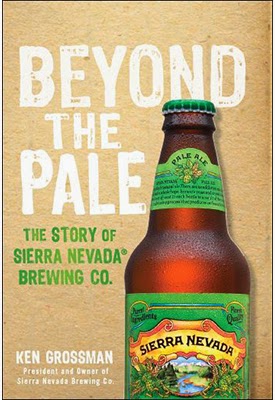 A true American success story, Sierra Nevada Brewing continues to set the pace among the exploding craft beer world. This is the "straight-from-the-horse's-mouth" story of founder Ken Grossman, who, in true American maverick style, began his business back in 1980 as little more than a hobby, literally out of garages and with makeshift supplies.

Grossman, as it turns out, is nearly as good at writing as he is at brewing. Well, that one's debatable. Anyway, his humble beginnings are detailed here from his upbringing in California, as are the numerous business and personal hurdles he has faced to create his recognizable brand. Grossman's writing style is relaxed and focused, delivering a fairly straightforward presentation that is effective and to-the-point.

Keep in mind, in 1980 there WAS no such "craft beer" or any semblance of a scene or support for Grossman's intensely-hopped pale ales. Only industrial lagers and expensive imports littered the wastelands of America. Grossman's teenage home-brewing experiments and tinkering with production methods are amazingly inspiring, and this story is the definitive tale of Sierra Nevada's growing pains in the earlier, leaner years, as well as a twinkle in the eye towards the future.

Now, as unquestionably one of craft beer's most influential and respected brewing companies, Sierra Nevada continues to innovate and exemplify the brotherly (and sisterly) craft beer world, sourcing ingredients naturally and sustainably, and teaming up with like-minded breweries (like the recent Beer Camp Across America series of beers and festivals). "Beyond The Pale" is a book any serious craft beer fan should read.

As a side-note that must be mentioned: It's also remarkable that even after 30+ years, Sierra Nevada's flagship Pale Ale is among the best out there.

Posted by Goatsden at 5:19 PM No comments: