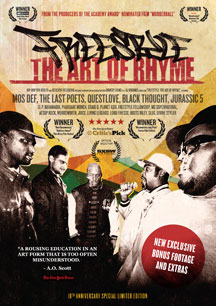 This documentary dates back to an original theatrical release in 2004, but that doesn’t tarnish the impact and importance of its message. Taking a deep and historical look at the early days of hip hop and the art of improvisational rap, “Freestyle” traces the lineage from Jamaican toasting to gospel preaching to modern street hip hop, all the while illustrating it with interviews and rare footage from early proponents and important figures like Mos Def, the Last Poets, and Aesop Rock, to name just a few.

From a historical standpoint, “Freestyle” is pretty well a definitive lesson in itself of the culture, eschewing most commercial angles and pop culture icons and focusing on the reasoning and skills of the early street MCs themselves, some obscure and forgotten but all very skilled and worthy.

This is a fine documentary and should be a must-see for anyone who professes to live or respect hip hop culture. Superb!

Posted by Goatsden at 1:10 PM No comments: 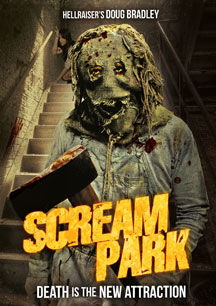 Mediocre slasher with Ogre and Pinhead

Another ultra-low budget horror flick with an affinity for the classic 80s slashers here, featuring a couple of notable cast members. Unfortunately, there’s little else here worthy of mention. The premise is simple — a failing amusement park owner decides to create a “media sensation” by hiring insane redneck thugs to commit murders at the park. The park’s teen employees, enjoying a night of drinking and partying, end up being hunted, one-by-one, by the maniacs (one played by an often-masked Ogre from Skinny Puppy).

Not much else to say here, aside from a memorable appearance by Doug Bradley (Pinhead from “Hellraiser”). The usual grisly killings are here, alongside some mediocre acting, and a bit of nudity (the appealingly busty Kailey Marie Harris drops some wondrous double-D bombs), but overall this one just falls flat (unintentional pun), not distinguishing itself from a thousand others just like it.

“Scream Park” isn’t terrible, but it is unremarkable and fairly pedestrian. Serious slasher fans could do worse, but casual horror geeks can take it or leave it in good conscience.

Posted by Goatsden at 9:41 AM No comments: