The latest Soulsavers album, "Broken", which features Mark Lanegan on vocals, is perhaps one of my favorite releases of the year. But it has yet to get an official, physical CD release in the United States, shamefully. Here's a vote for a real CD release here, as it would be considered a "must" for me. Anyone? Please?
Meanwhile, here's the brand new promo video, for "Unbalanced Pieces". Note that the album itself includes the participation of Dustin O'Halloran of Devics, Jason Pierce of Spiritualized, Gibby Haynes of the Butthole Surfers, Mike Patton (of too many bands and projects to list), Martyn LeNoble (Jane's Addiction, Porno For Pyros), and, of course, the inimitable Mark Lanegan. Oh, and there's a stark and haunting take on Will Oldham's classic Palace gem, "You Will Miss Me When I Burn". If that doesn't sell you, well, you're just missing out or something...

Posted by Goatsden at 1:18 PM No comments:

Gnaw Their Tongues - "All The Dread Magnificence Of Perversity" CD 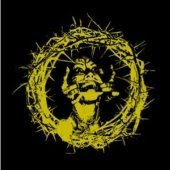 Now this is an imaginative and evocative mix of extreme sounds. Imagine, if you will, the typical monochromatic black metal sound, then mix in a swollen, gangrenous slab of proto-ambient classical-drone bombast, and what you get? Gnaw Their Tongues know, as they create precisely that. The opener, the provocatively-titled "My Orifices Await Ravaging", is a torturous and dramatic nightmare soundtrack that's infinitely more horrific than any scary-movie score I've heard in many a year. Indeed, GTT creates brutal symphonies of slow, doomy grind infused with industrial-noise, sadistic samples, symphonic elements, and layered drones. But where groups like Sunn O))) create epic, slow-burn doom/drone manifestos, Gnaw Their Tongues are more hyperactive and paranoid, whisking the listener away on a voyage into the minds of perverts, murderers, and the criminally insane. It's not a nice and comfy place, needless to say. "Verbrannt Und Verflucht" is a stunning assault of malevolence, joining a funereal dirge with an oppressively blackened sense of palpable tension. Other cuts, like "Broken Fingers Point Upwards In Vain" wash over the listener with a threatening sense of foreboding. Gnaw Their Tongue's richly cinematic tones are awash with dread and fear. Enter at your own risk. (Crucial Blast) 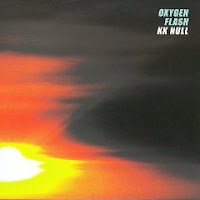 The Japanese icon Null (aka Kazayuki Kishino), for those not yet familiar, is a veteran guitarist who's resume reads like a "who's who" of avante/experimental/noise musics. He's led trash/noise groups like YBO2, Absolut Null Punkt (A.N.P.), and sludge-grind metallists Zeni Geva. He's also collaborated with just about everyone of note in the world of left field music for the past 25 years. This new solo release of 2006-2007 work eschews the guitar in favor of loud, unsettling electro-acoustic cacophonies. The 9 untitled tracks here clock in at over 49 combined minutes, and they range from near-power electronics to overloaded, fractured, and amplified digitally-processed glitch - sometimes grating (and unashamedly so), yet rife with an ear for subtlety upon deeper absorption. Track 4 is a particularly monolithic slab of barreling, broken rhythms, and chaotic electro-percolations. Track 5 is a stinging barrage of trebly distortions and proto-rhythms, sounding quite alien and disorienting, while track 6 is a hypnotic space-out collision of geiger pops and squeltchiness. Other tracks are similarly foreign and, due to their rather extreme nature, difficult to ignore or relegate to the background.
Null's skills are evident here, as in the hands of a lesser ear, this set could be indulgent and messy. As it is, "Oxygen Flash" is a highly immersive set of playful sonic compositions with much to offer upon repeat spins. Enjoyable and unforgettable work.
(Neurot Recordings)

KK Null home site
Posted by Goatsden at 11:50 AM No comments: 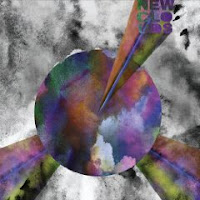 Portlander Adam Forkner's second release on Kranky shows an even more spacious, cosmic predilection than his excellent Krautrock-inspired debut of 2007. Beginning with the expansive 18-minute magickal-stoner ambience of "Tuesday Rollers And Strollers", White Rainbow produce a myriad of lush, even melodic sound-journeys that are hopeful, gauzy, and somehow primal and shamanic. I am reminded a bit of Popol Vuh's wonderful soundtracks to Werner Herzog's films, which isn't a bad thing at all. Forkner's vaporous, rapturous soundscapes are at once psychedelic, ambient, and trance-inducing, with each of the four extended pieces here gelling well together into 67 minutes of blissed-out, tripped-out space synaesthesia. Superb. (Kranky)

White Rainbow tumblr
Posted by Goatsden at 5:04 PM No comments: 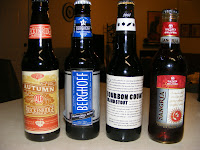 The season of the witch is upon us, so that means falling leaves, the holy daze season, and some nice and strong Oktoberfest/Fall beers! Keep in mind that the ratings here are my own, and can be echoed on my BeerAdvocate site. Beers are rated from 1 (being awful) to 5 (godlike). But dare to try them yourself...and support the indie brewing culture.

BRECKENRIDGE AUTUMN ALE (Denver, CO) - 4.0
A nice and deep (almost black) opaque ale with a thick head, this one
has a spice hint at first, with an almost burnt chocolate/caramel
follow-through. It's strong and malty, but the citrus-spice zing gives
it an added dimension, and a clean finish. Attractive and tasty, this
Breckenridge's Autumn Ale is more than enjoyable, and an easygoing,
yet still uniquely creative brew.

BERGHOFF TRADITIONAL BOCK (Monroe, WI) - 2.5
A traditional bock is, by nature, highly malted. And well, this
no-nonsense beer certainly fits that description. At the same time,
the malt presence here seems to overload my taste buds at the expense of any other flavors. Pouring a deep brown/amber, Berghoff's bock initially has a simple, rich caramel taste which permeates every subsequent sip. I sense no complexity, and this one-dimensional brew just doesn't cut it with me.

GOOSE ISLAND BOURBON COUNTY STOUT (Chicago, IL) - 4.5
Ah, this one is a deep, charry black stout that pours from the bottle
like a viscous oil. The scent recalls sweet cherry, aged oak, and of
course the sting of bourbon (this is aged in bourbon barrels, thus the
residual flavoring). First tasting reveals a heavy, potent alcohol
presence (it is a goliath 13% ABV, after all). This initial palate is
followed by a smoky, rich maltiness that is simply overpowering. No
session beer here, as this one's best for sipping or sharing, unless
you're seeking a quick ticket to buzz-land. An stunningly strong beer,
and a uniquely memorable "extreme beer" experience.

BACARDI SILVER - SANGRIA (St. Louis, MO) - 2.5
If it looks like a fruit punch, but smells like a wine, which is it? I
can't tell exactly what this one is, but I can report that this light
and fizzy drink is not altogether awful. I detect flavors like berries
and grapes alongside the more astringent sulfites. I've had several
kinds of these fruity "malt beverages", and most are horribly sugary
and artificial-tasting. Sugary, yes. Artificial, sort of. But I could
down it and not make sour faces, and that alone says something.
Posted by Goatsden at 10:28 AM No comments: