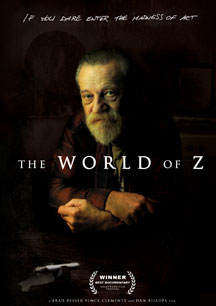 Genius or madman? Seems that quite often, there's a distressingly fine, even undetectable line between the two. I had never heard of him before, but Zbigniew Fiks, using the "easier" trade name "Z", crosses both lines. This sympathetic and loving documentary shows the duality of Z well.

A Polish-American immigrant, Z has been a life-long artist, crafting everything from poems to brilliant visual arts and sketches. He's also been diagnosed with manic-depression, and his bouts with his affliction have led to divorce, estrangement from his children, and health issues. "The World Of Z" candidly shows Z's fluctuations and extremes, from a rambling alcoholic madman to a kind, well-spoken, and intelligent artist.

His ex-wife and children are interviewed, along with doctors and friends. There are plenty of classic old home movies and photos, adding to the mystique of this "outsider artist" who is ultimately engaging and brilliant. "The World Of Z" is a fascinating and immersive look at the life of a troubled, but ultimately likable, personality on the fringes. Recommended. (City Pigeon)

Posted by Goatsden at 4:15 PM No comments: