Housed in what was once an old schoolhouse, the '930 Listening Room' is, in actuality, a part of Sojourn Community Church, and this is actually a really nice, informal place for shows. There's an adjunct art gallery (secular) attached, and the seated venue is comfortable and roomy. The complimentary coffee/tea is also a nice touch. There was no overt evidence of reference to any religious elements (aside from the initial opening act being a local church deacon named Jamie Barnes, who performed some really pleasant folksy indie sounds). Anyways, after our little hot beverage 'pick-me-up', we walked around the little gallery space and then found front-row seats. Chris Willitts is a San Francisco-based guitarist/programmer, and his funny faces and comical demeanor helped his set substantially. I thought his music was far too disjointed and freeform (and I appreciate a lot of abstract music, thank you very much). He ran his guitar through all kinds of digital computer effects, and the results were really pretty messy. His final track was his crowning moment, approaching a kind of ambience, but I wasn't really very interested otherwise.
SOTL were next, and this was quite a spectacular showing, and leagues better than when I saw them last in Bloomington in 2003 or so. Toting along a full (live!) string trio, Adam Wiltzie and Brian McBride's hypnotic, organic ambient sound was brought into proto-classical territory, with plenty of dynamic and melody. Their set ran about an hour, and their extended pieces were lovely and intense, with abstracted backing projection films and a lightshow that cast the stage in all kinds of hazy, colorwashed glows. Stunning and deep, Stars Of The Lid are among the leading purveyors of true ambient sound in all the world. This was certainly a world-class show, and in little lazy Louisville, no less. Wow! And if you happen to be near one of their shows anytime soon, check out the limited tour-only CD available (it looks like it's called 'Carte-De-Visite'), as well, featuring 9 rare or unreleased SOTL tracks. It is wonderful, as is anything in the group's astounding back catalogue. photo credit: Nick
Posted by Goatsden at 5:44 PM No comments: 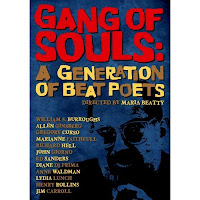 This digital reissue of a 1989 New York TV program attempts to cover the history and motives behind the highly inspirational literary movement of the late 50's through 60's, and in 60 minutes, it really just barely scratches the surface. With precious little archival footage, Beatty's film is really a bunch of talking heads. She interviews some key figures (William S. Burroughs, Allen Ginsburg, Gregory Corso, Diane DiPrima, and later 'children of the beats' like Henry Rollins, Lydia Lunch, Jim Carroll, Richard Hell, Marianne Faithfull, and others), and they surely have lots to say, but still, I can't help but feel there could've been so much MORE. It's always great to see now-passed artistic giants like Burroughs or Ginsburg interviewed, of course, and Rollins is a consistenly great character and presence, but this alone can't carry this film. In actuality, 'Gang Of Souls' would make for a fun little 'bonus feature', added-on to a more comprehensive documentary (and I know there are some out there), but for now, unless you're doing some deep research into this scene and movement (or are a major fan/collector of an artist included here), this one's a wee bit lacking. (MVD Visual)
Posted by Goatsden at 5:10 PM No comments: 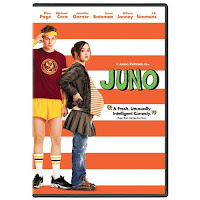 So here's this season's 'Little Miss Sunshine' - small-time indie comedy goes BOOM! Well, this one's arguably better. You've already seen this, so no point in me going too far into detail. Ellen Page (who's all of 21 now, yet a serious veteran of TV and film) plays a teenie of 16 who gets herself knocked up by her best friend/love interest (the nerdy but likeable Michael Cera). Wacky hijinks ensue, and her decision to give up her unborn spawn to childless couple Jennifer Garner and Jason Bateman (both charmingly human) has some small hitches, too. But it's all in good fun, and this lighthearted look at the reality of parenthood is both fun and funny, and despite some potentially questionable content, this one would probably be fine for most teens (thus the PG-13 rating). I liked it just fine, though, too, and despite the hype being a little overbearing, it's worth a look.
Posted by Goatsden at 9:51 PM No comments:

Sidney Lumet - "Before The Devil Knows You're Dead" 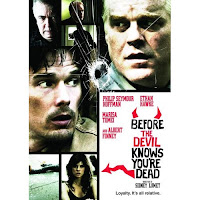 First, Philip Seymour Hoffman is apparently king of all Hollywood. He's seemingly everywhere, and that ain't a bad thing, necessarily, as his chops in his biz is considerable, yo. Well, this murder-crime caper film, directed by the geriatric Lumet, is solid, to be sure. Ethan Hawke plays Hoffman's bro, and together, this pair struggles with life itself, culminating in a robbery that they scheme up to offset some 'expenses'. Trouble is, the robbery they concoct is of their own family's jewelry shop. Needless to say, things go horribly awry. It's well-done, though the film's a bit jumpy, timewise, adding to the confusion. Factor in that I was exhausted while watching this, fending off sleep, and I'm perhaps not the best source of a review. Nonetheless, this film was certainly likeable, but I'm somehow just not convinced all the way.
Posted by Goatsden at 9:41 PM No comments: