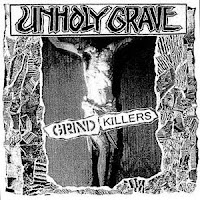 Ah, this one is interesting. Unholy Grave are a veteran grindcore act from Japan who've released spades of split LPs, EPs, and cassettes since 1993. This 23-track, 34-minute blast was recorded live in a Dutch studio, and is a growly, lo-fi clot of brief grind blasts that could easily be a mid-80's UK act. Tracks are pretty well interchangeable, save for a faithful (and humorous) cover of the Ramones' "Beat On The Brat", and Unholy Terror's political direction is definitely more punk than metal. Tracks like "No Racial Superiority" mince no words. And a number of anti-terrorism tracks also show that Unholy Grave aren't all about fantasy or "evil" for evil's sake. This is pure, uncut crust/grind cut from the same cloth as early Napalm Death. Cool and fun. (Selfmadegod Records) 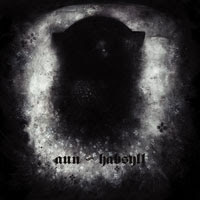 This split vinyl won't be something for everyone, but anyone with a taste for noise and dark, extended doom/drone atmospheres may find plenty to envelop themselves in. Side A is by Montreal's Aun (aka Martin Dumais and Julie Leblanc) Their opening cut, "Druids", is 13 minutes of foreboding atmospheres and plodding death rhythms. Imagine an instrumental machine-doom-metal, monolithic and single-minded, and you'd be in the ball park. Their second track, "Fall Out", is a more spacious attack of sinister machine rhythms and droning guitars with a rudimentary melody shining through. Decent work, but rather forgettable in the end, especially after hearing Side B.
French heavy doom/noise/drone act Habsyll are less subtle on their side, with their monster 23-minute "IV", which rivals acts like Sunn 0))) or Earth in sheer terms of width and girth. It's a slow, grinding, downtuned guitar crunch, with chaotic drums keeping things lively. The spastic, agonized vocalizations are feral and frightening, in such a good way, too. Picture, if you will, classic early SWANS meeting black metal, and Habsyll are threatening like that. Refreshingly intense and confusingly evil sounds to scare your neighbors and antagonize your roommates equally! (Public Guilt) 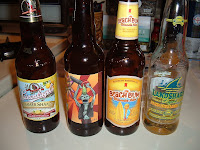 And here we go, late but not sorry. Seriously, there's been a shitstorm of personal distractions to tend to, so here's a compiled 2+ months of new beer reviews. As you can see, it's Summertime, and lighter lagers are the order of the day. Some good stuff sampled of late. Check out the tastes. And, as always, support your local brewery (remember freshest is usually the best). And if that's not always possible, at least support the little guys. Down with corporate beer dictatorships and "pay for space" in stores. Hail the craft brewers and microbrewers! Sermon out. Off to see Mono and The Twilight Sad in Nashville.

The pale, cloudy appearance isn't too impressive up front for this summery lemonade-infused wheat beer. The initial citrus smell isn't bad, though, but what really counts is the taste, and here it just reminds me far too much of Pledge furniture polish. Something here seems fishy (and plastic), and I won't be picking these up anytime soon.

A nice, rich, amber as promised upon pouring into my ale glass, followed by a hoppy (but balanced) flavor. Rad Red's not flashy, showy, or "extreme" (by a long shot), but with hints of maple and citrus, this one's got a nice and complex flavor profile. Maybe I'm being pretentious for deciphering those flavors, but this one's unquestionably steady, sturdy, and brings joy to my palate.

This rich ale pours golden with medium lacing, and though it doesn't offer anything too remarkable or unique, it does shine with a crisp maltiness that walks all over the usual summer lager lineup. More than drinkable, Beach Bum would be an ideal middle-point for an inexperienced drinker (or seasoned lager fan) to be gently swayed into the wide and wonderful world of ales. Decent enough.

This light beer has all the attributes of a classic lager -- pale. golden appearance and an easygoing flavor profile that's more on the malty side. The clean, crisp taste compares more than favorably to Corona, so summer beer fans looking for a light and tasty alternative to the more mainstream "light" "beers" should find Landshark ultimately satisfying. I say give this one a chance. You may be pleasantly surprised.

Cloudy copper (like a strong wheat beer) at first impression, without much lacing. I didn't get much of an olfactory reading here, maybe just me, but the taste is decidedly un-lagerlike. Rich, malty maple or molasses overtones seem present, with a hint of floral hop character upon finish. Quite delicious, and only hints at the heightened alcohol presence. A certain winner.

A nice, clean, and light lager with a satisfying smooth maltiness, Pacifico easily holds it's own against the mainstream American lager monoliths. This pale golden beer is a perfect example of a lager - drinkable and easygoing. Maybe it's not frilly or showy, but this one certainly quenches the thirst and gets the job done. Next time you're in the mood for a lighter beer, pick up these instead of the usual light beer (no names, please) and see what you think. I like it.

Pouring a deep bourbon-brown, and tasting sweetly malty (like a brown ale), Negra Modelo is my go-to choice when frequenting Mexican restaurants. It's uncharacteristically dark, when compared to most Mexican brews (which tend to be light lagers), but nicely satisfying, especially when consumed alongside a good burrito or fish taco. A classic and favorite of mine.

A nice pale amber ale with a nice foamy head, this ginger-spiced brew tingles the nose with it's pungent ginger zestiness. And despite ginger's natural health benefits (proven to help with nausea and digestive ailments), I'll admit that ginger beer isn't much more than a novelty at this point. I've always been a fan of Left Hand's brews, but this beer has me torn. It's among the better ginger beers I've had, for certain, and it's a nice diversion from the usual fruit or spice-laden ales, but I can't say it's one I'd pursue, either.

A deep red-amber hue and a thick head (and lacing) heralds this potent 9.6% ABV beast. First taste? Super-strong, rich, and overpowering hoppiness and syrup-y malt presence. This one packs a serious wallop and takes some dedication to finish. It's memorable, but not one to savor repeatedly.

Pours a thick oil-black with a medium head. Olfactories pick up hints of fruity esters and a sweet vanilla punch. The taste is consistent with this before a brisk burn of alcohol takes over. Fans of bourbon barrel stouts will be interested in this uncharacteristic brown ale, aged in Paraguayan Palo Santo wood vessels. Certainly a unique and delicious brew.
Posted by Goatsden at 11:38 AM No comments: