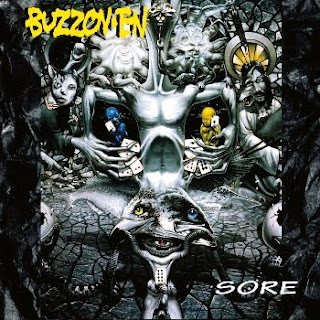 This limited-to-2000 copies gold-disc remaster combines this South Carolina stoner/sludge metal band's famous second album (from 1994) with another 4-song (28 minute) EP of unreleased material. Unbeknownst to me, this is an influential album of underground metal that, alongside their brethren in Eyehategod, helped jump-start an ugly and evil form of heavy rock that utilized elements of noise and even post-industrial sounds alongside mean, drug-fueled hardcore. It's not a nice or friendly sound, but one rooted in pain, aggression, and negativity. So no upbeat pop tunes here.

Opening with the ugly and hallucinogenic sound collages of "Sore", the band juxtaposes twisted, swampy grooves with energetic hardcore punk/metal crossover. It's a well-layered mix (by Billy Anderson), full of down-tuned guitars, weird and grimy sound effects, and the screeching, pained vocals of Kirk Fisher, who was apparently very, eh, medicated during this band's reign. Imagine Corrosion Of Conformity if they became possessed by evil spirits on a week-long drink-and-drug binge. It's a grueling trip through a side of life we normally don't want to see firsthand. Some uncompromising and harrowing sounds here, not for the faint of heart. (Metal Mind Productions Poland/Roadrunner)
Posted by Goatsden at 1:50 AM No comments: