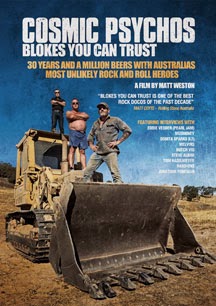 It's a shame I had never been familiar with this veteran noise/punk act from Australia. Seems they've been quite influential on a number of famous Pacific Northwest rockers -- many of which are interviewed here. Director Weston qualifies this fine, engrossing documentary with testimonials from folks like Eddie Vedder, Mudhoney, Donita Sparks of L7, Melvins, Butch Vig, Steve Albini, and label supporters from both Sub Pop and Amphetamine Reptile Records.

But the best parts of this film are the in-depth interviews with Cosmic Psychos members, namely the rock wildman Ross Knight, who's steered the band through (as the subtitle proclaims) a million beers, parties, women, and all the requisite tough times that serious devoted rock bands encounter (like a longtime member passing away due to an addiction). It's curious that, while still performing with a rejuvenated Cosmic Psychos, Knight is a professional body builder as well as a devoted family man and farmer, with a penchant for big tractors. Through it all, Knight is a good guy, likable and full of entertaining yarns.

There's classic footage of the band, as well as interviews with other members, their families, friends, and supporters. "Blokes You Can Trust" is everything a great rock doc/bio should be -- entertaining, fun, and even emotional. Recommended even for those unfamiliar with the band's heavy, raucous punk sounds. Bravo!

Cosmic Psychos dot com
Posted by Goatsden at 10:54 AM No comments: 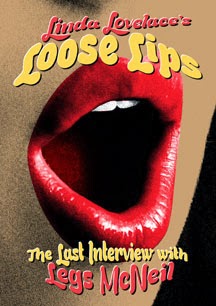 This documentary attempts to answer some of the questions left behind by Lovelace and her claims that she was forced to do "blue movies" by her abusive and powerful manager-husband. Some holes are poked in many of Lovelace's comments, and indeed Lovelace seems to have been proven (at worst) a liar (and at best, a deluded and sad mental case).

The saga of "Deep Throat" is a fascinating one, and it's peppered with all kinds of sensational claims (Lovelace's reported abuse, mafia involvement, the Anti-Porn Movement that followed, and the Hollywood insiders who befriended Lovelace -- Hugh Hefner, Sammy Davis Jr, and others). "Loose Lips" attempts to tie up some of these loose ends, and is an engrossing and entertaining look at a complex -- and troubled -- individual who never seemed to find the peace (or notoriety) she so desperately desired.

MVD Visual
Posted by Goatsden at 9:53 AM No comments: