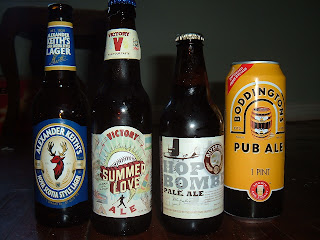 There isn't really a season for beer, but there are seasonal beers. As Summer nears it's end, here are a few more to take note of.

My ratings are on a scale of 1 to 5, with 1 being crap and 5 being godlike. But don't take my word on it. Try them all yourself! And always keep it indie.

Reviewed this one before, and I liked it better then. Pours a clean yellow-amber, with a modest foam and delicate lace. Malty sweet on the nose, kinda corny, even. Not a great start. The taste is sweet, with a caramel-honey vibe. There's no complexity whatsoever here, and I found this one-dimensional, off-balance, and needing to be fine-tuned. No, thanks.

This nice, clean, golden ale immediately invites with a rich head of fine white foam and spotty lace on the glass. The aroma? crisp and delightful, with plenty of fresh citrus hops and even a trace of fruit. I get more of the hoppiness in the taste, but this one isn't bitter or harsh at all. There seems to be hints of citrus and even apricot in there. A delicious and palate-pleasing summer brew with tons of nuance and flavor, all the while remaining light and drinkable. Winner!

This attractive pale ale pours a clean amber in my glass, with a thick head of bone-white foam. Decent spoke-style lacing. Olfactory-pleasing, with touches of pine and orange. The taste is mild, but distinctive and full of character. I get some citrus hops notes up front, with mostly orange peel, followed up with a malty backbone that smoothes out the hops and suppresses the bitterness. This one's a sturdy, well-balanced, and very enjoyable ale.

This "draughtflow system" pint can pours with a huge head of quickly-dissipating bubbles and no lace. The nose is sweet and even a bit toast-like. Flavor is mild all the way, and even watery. I'll give it points for being "creamy" and "smooth", yes, but this beer has little character or body. Thin and uninteresting, this is one to avoid. 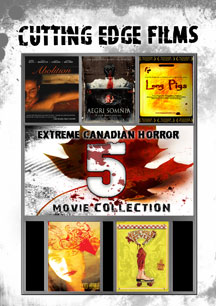 This 5-film set (on one disc, no less) has more to offer than expected, luckily, especially as it took 7+ hours to sift through it all!  In truth, there are some decent and imaginative indie flicks here.

"Abolition" (director: Mike Kiasson) begins the set, and holds up with some well-done cinematography. The story revolves around a troubled man named Joshua who, as it turns out, is both a prophet and a murderer. This one features a charismatic and memorable appearance by horror legend Reggie Bannister ("Phantasm"), which helps the cause, too. The movie seems to drag a bit, but I give it credit for having some subtlety and direction.

"Aegri Somnia" (director: James Rewucki) is a Lynch/Aranofsky-inspired art/horror film that follows a reclusive loner named Edgar whose social anxieties lead him into madness and ultimately to face his own personal "demons". It's another technically well-done film with some fine cinematography and a keen, artful visual sense.

"Long Pigs" (director: Chris Power) is a faux-documentary whereas a pair of young filmmakers are granted access to record the daily activities of a cannibalistic serial killer. There's plenty of grisly gore here, and some entertaining moments of black comedy.

"I Heart Doomsday" (director: Patrick Downing) comes close to suckness, but pulls through with an unusual charm. This is a weird little story of a nerdy, backward, and megalomaniacal "scientist" who invents of robotic version of himself to woo a beautiful woman (the stunning Christine Ghawi). The plan backfires as she falls for the robot. Sound silly? It is, as are the dirt-cheap effects and sets. But beyond the superficial aspects, this movie has heart, and with bigger production values, it could be a winner.

Finally, there's "Werewolf Fever" (director: Brian Singleton), which drops the bomb altogether. This tongue-in-cheek splatstick is set in a small-town Kingburger fast food restaurant, where a late-night delivery is interrupted by a bad case of lycanthropy. Trouble is, "Werewolf Fever" isn't amusing, only tedious. This is plainly a bad movie.

So, horror in Canada is pretty alive and kicking. There are some fun (albeit raw) moments here, so die-hard horror aficionados will surely find something of value. (R Squared Films) 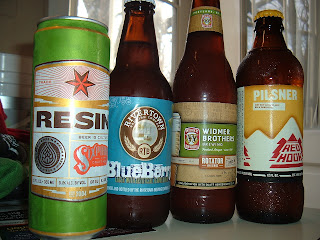 It's time again for more beer reviews. Expect even more in the coming weeks, as this site becomes better balanced amongst the arts...film, sound, and flavor!

Remember to keep it indie, keep it local, and keep it artful! Beer is food, and food is life, so wouldn't beer be life? Goatsden thinks so.

Here are a few more recent reviews. Try them yourself and see if you agree, and let us know! Until next time, prost!

Amber with hints of ruby upon pouring from the can, with a huge head of foam and gorgeous lace. Nose is sweet grapefruit, as is the taste. It's a sticky mouthfeel, being gloriously hopped, but with an underlying backbone of big malts as well, lurking beneath the palate-shocking hops. Definitely one for the hardcore hop-heads here. Solid, and a good experience, for sure.

This cloudy, pale yellow light lager pours with a nice head, but no lace to note.
The aroma is definitely blueberry, but more in line with a Nehi soda than fresh. Taste is very light, and not at all complex. There's a sure blueberry-like character, but it's a weird and funky sweet that clashes with the lager grains. Maybe I'm swayed by the bottle stating prominently that there's "artificial flavor added", but this just seems wrong. The finish is despicable and chemical-like. Awful.

Very light but cloudy yellow in complexion, with a full head and detailed lace. Impressive. The nose is positively delectable, being intensely fruity with a deep citrus hops ester vibe. Flavor is tough up front, with a bitter pine/grapefruit hops bite. I get a light hint of tea and spice towards the finish. Unique and quite enjoyable!

A fairly typical pilsner here, pouring yellowish with a white head and big, loopy lace. The aroma is lagery and grainy - definitely heavy on the malts. Tastewise, it's rather sweet, but not overly so, with a tinge of hoppiness at the finish. Solid, if forgettable.

Posted by Goatsden at 3:26 PM No comments:

Almost 200 years have passed since Bavarian colonists settled what is now New Harmony, Indiana. This group, known as Harmonists, took great care to make their land prosperous and inviting. Unbeknownst to them, their brewery, which used techniques learned from their previous home in Swabia, Germany (which, by the way, is one of the richest beer-brewing cultures in the world), started a home-brewing revolution that is now being re-examined. Each year, the Brewers Guild of Indiana selects a historic local beer, and local brewers attempt to decipher/interpret the "recipe".

Great Crescent Brewing, of Aurora, Indiana, owned and operated by husband-and-wife team Dan and Lani Valas, have done a dandy job creating a dark lager based on "Indiana's First Beer", as brewed in 1816 by Harmonist brewmaster George Bentel. This top-notch lager, called simply "Dark Lager", pours a murky brown/black, with a malty chocolate aroma. Although light in body, this dark beer tastes like a mildly smoked porter, with a hint of cocoa and a mellow roasty finish. Mild and session-worthy, this is a seriously delicious beer.

Also from Great Crescent, I was fortunate enough to sample the brewery's fine "Coconut Porter", which pours a sleek black with a nice and smoky nose. I don't get much coconut in the aroma, but its an appealing mix nonetheless, with hints of chocolate and roastiness. Again, this is thin-bodied (for a porter), but the taste is superb. Not as cocoa or coffee-oriented as some porters, this one's got a distinctive wood-smoke character. Fans of German rauchbier (smoke beer) may find this particularly attractive and enjoyable. I say, a fine and well-done porter, with a lot of flavor and a unique palate. Bravo to Great Crescent!

As of now, Great Crescent has begun to can their beers in pints, and has them available in limited 4-packs regionally (Central and Southern Indiana). I found some at a local store in Evansville, Indiana (Winetree Liquors).

Posted by Goatsden at 9:55 AM No comments: 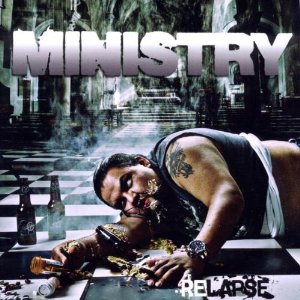 It's a shame about Al, resorting to this juvenile and meat-headed selection of tunes. He played it right a few years back and "retired" his long-standing and influential band Ministry after some sub-par recordings with mainly hired guns as his "band" and some plain awful albums of classic rock covers. Now, after being convinced by guitarist Mike Scaccia to do "ONE" more, here's the result -- another collection of un-subtle but explosive electronic thrash metal monsters that do absolutely nothing to redeem Ministry or further their legendary status.

Opening with the in-your-face obviousness of "Ghouldiggers", the album cruises through 9 (plus one remix) more breakneck riff-monsters. "Freefalll" is cartoon metal, but a personal insight into Al's addiction demons, so it gets a pass. Other cuts, like the positively embarrassing "Weekend Warrior" or the hideous "Git Up Get Out 'N Vote", which is as hammy and over-the-top as it sounds, prove to be among the most shameful tracks Ministry has ever done. The rest of this is simply re-treading and re-hashing his previous few albums, nothing more and nothing less, sadly.

On a good note, the production here is tight and crisp, with the guitars and drum(machine)s being deliriously loud and clear. And the faithful cover of the S.O.D. classic "United Forces" is fun enough. But still, I am in shock at how silly and adolescent this whole effort is. Just no. (13th Planet/ AFM Germany)

Posted by Goatsden at 9:26 AM No comments: 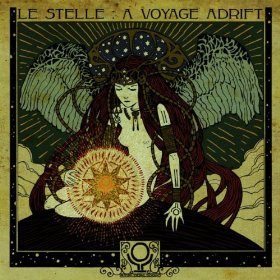 Right out of the starting gate, this fierce Italian metal band easily proves their chops. "Mirzam" is a freight-train of gut-churning, bowel-scrambling speed-noise terror. It's a challenge to even get my brain around such a feral onslaught of math-metal madness.

"Sirius" follows, with the thud and wallop of doom/sludge meeting space rock somewhere akin to a Hawkwind/Down collaboration. "Kochab" is the sound of a rabies-infected wild animal fronting Voivod maybe. "Sirius B" is another stab of vicious space metal, laced with electronics effects, huge, monolithic guitar assaults, and throat-clearing shouts from vocalist Samuele Storai. "Polaris" also features massive SWANS/Neurosis riffage, along with Storai's black-metal shrieks. Closing it all out is "Rigel", which begins as an ominous instrumental piano-and-strings piece, before erupting into another scream-and-riff beast. Powerful and intense! I.C.O. are a new breed of metal, taking pieces from disparate heavy styles, and coalescing them into a familiar, yet foreign form. Bravo! (Supernatural Cat)

Posted by Goatsden at 9:07 AM No comments: 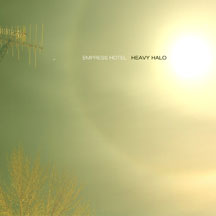 Louisiana indie-pop ensemble Empress Hotel's second album is a pleasant set of upbeat, well-constructed melodic songs. The band professes to being inspired by one-hit wonders of the seventies, but I hear more carefree sunny California top-down symphonic pop elements, somehow. Anyway, "Last Picture Show" has all the whimsy of Vampire Weekend (sans African influences), while "Drugs" funks it up with disco references. But far from a silly parody act, Empress Hotel's stylish music is catchy and oddly affecting. (Park The Van)