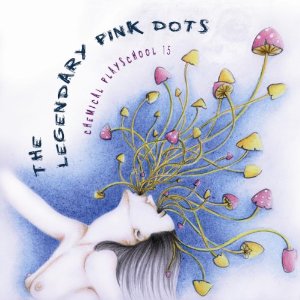 As a longtime fan (but not fanatic) of the Dots, I've lost touch a bit in recent years with the Holland-based group's spacy psychedelic experimental rock. The band, led by vocalist Edward Ka-Spel and keyboardist Phil "Silverman" Knight, have been a prolific force over the past 30 years, exploring everything from krautrock to post-industrial to ambient to musique concrete.

The 5-track, 55-minute "Chemical Playschool 15" explores the band's more experimental and less song-based sides. It opens with the 9-minute electronic ambience of "Immaculate Conception", before dipping into 19 minutes of trippy, shifting textures with "Sparks Fly / Museum". "The Opium Den Parts 1-3" is what you'd expect, whereas "Ranting And Raving" is a dizzying electro-freakout with Ka-Spel's enigmatic verbiage. "Immaculate Conclusion" is just that, a summation and a fitting finale for this well-rounded trip. Excellent!

LPD site - The Terminal Kaleidoscope
Posted by Goatsden at 8:38 AM No comments: 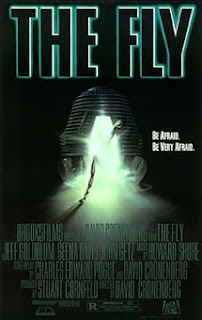 Cronenberg's 1986 re-imagining of this horror classic deserves a look back, thus this review. Taking only cues from the 50's short story and campy original, Cronenberg drags "The Fly" into some gruesome and intelligent directions, and this 27-year old film holds up quite nicely today.

Starring Jeff Goldblum as the brilliant and nerdy scientist who gets too careless in his research and Geena Davis as his love interest/foil, "The Fly" can be seen as a modern-day Frankenstein tale to some degree. Goldblum's character, Seth Brundle, has spent years working on "telepods", transferring molecular particles across distances by dissolving the matter, than re-distributing it (preferably in the correct place) in his other "telepod". When he tries the telepods on living tissue (himself after a moment of drunken weakness), he makes a terrible mistake, not realizing a common housefly has also landed with him in the pod. When the telepod mixes up his matter and the fly's, then re-arranges it as one being, he is unwittingly made, in his own words, into "Brundlefly". His metamorphosis from man to "man-fly" is not for the faint of stomach.

The human element is omnipresent, and Goldblum and Davis are superb in their roles. The splattery special effects are stunning and fittingly goopy, and the finale is both explosive and tragic. Fans of Cronenberg's other early work will find many similar elements -- namely a fusion of man and technology into a "new flesh" -- psychological horror paired with vile gore effects. I quite liked this one.

Posted by Goatsden at 8:32 AM No comments:

Der Blutharsch - "The Track Of The Hunted" CD 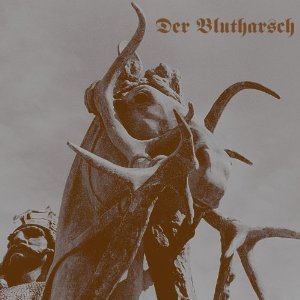 Albin Julius's 5th album as Der Blutharsch (originally released in 2000) is a solemn, militaristic, and dark album of looped classical samples and martial song structures. With inspirations from old European musics, and not without a modicum of controversy (some have labeled Julius's projects fascist due to his flirtation with Nazi and other suspect ideological imagery), Der Blutharsch's bold music shows a close kinship to bands like early Laibach or Death In June.

What these 10 untitled tracks lack in subtlety or complexity, they make up for in single-mindedness. Each track is nearly mantric, with repetitive structures and a limited sound scope. "Track 7" lightens up a bit with some brass samples, as does the whimsical "Track 9", which is a scratchy recording taken from an early 20th century folk recording. It closes out with "Track 10" -- a bombastic (live?) cut with big drums and declarative chants. A solid work, not outstanding or unique, but certainly a treat for fans of the aforementioned DIJ or Laibach's early militant industrial sounds.

Der Blutharsch site
Posted by Goatsden at 8:02 AM No comments: 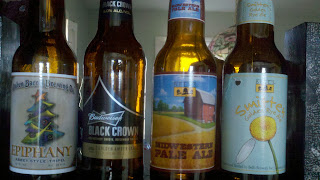 With so many new craft brews (and, indeed, new craft breweries) popping up, it seems there is an unending wealth of new beverages to review! Not a bad thing. Here are a few recent samples I've enjoyed. Remember, the scorecard runs the gamut from 1 to 5, with 1 being crap and 5 being king. That said, anything at a 3.0 or better is decent. Support your local craft breweries and independent beer in general.

Oaken Barrel has been around for 5 years now, and I have yet to meet one of their beers I didn't like! Congrats to them for 5 years of making Indiana brew approachable and enjoyable. This is their interpretation of a Belgian tripel.

Cloudy golden upon pouring into my Viking glass. Nicely carbonated, but lace is thin. Nose is toasty at first impression, with some candied or dried fruit coming in behind. I don't get any spice in the nose, though, oddly. Taste is rich and malty. Definitely a big flavor here. I get candied fruit (figs, berries, fruitcake) along with a mildly spiced note. The finish is dry with a balanced fruit-spice melding. The bottle doesn't note the heavy-duy 9.4% ABV at all, but it's evident 2/3 through the bottle!

Overall, this is a solid brew, and certainly a faithful interpretation of the big Belgian tripel style. Enjoyable.

I had to at least try this latest marketing plot from the cut-throat corporate side of brewmaking (and avowed enemy of independent brewing). It's a typical American Adjunct lager in style, but with added alcohol content (6%) and a tad more body than Bud Light.

Pours a clean, clear golden amber, as promised on the bottle. Solid head of fine off-white carbonation, which subsides quickly, leaving no lace. Nose is yeasty and grainy. Not bad, just pretty well generic. Taste is sweet and mild, with almost no hop bite whatsoever. There are some toasty caramel and toffee tones, and even a hint of fruit. I get a really sweet finish, too, which kind of kills my enjoyment.

I've had much worse beers before, but this isn't one I'd return to, given the choices.

Bell's is a leader in craft brewing, and among the top 10 independent craft breweries in the US. They have trail-blazed the path for craft since 1985 and are always reliable in making tasty (and occasionally groundbreaking, as with their Hopslam double-IPA) brews. Midwestern Pale Ale is a re-branded (and, I think, re-formulated) version of their previous Bell's Pale Ale. I like this much better.

Pours a cloudy golden with a superlative white head and attractive tree-line lace. Lovely! Nose is crisp malts and a snappy citrus hops presence. Seems balanced and enticing. Taste is nicely hopped, but not overly so given the style. I get a complementary malt bill alongside the hops.

Overall, a perfectly balanced and exemplary pale ale. Top marks for the style.

Pours golden and semi-cloudy due to massive chunks of sediment. My bottle is dated only a month ago, so I have no explanation for this. Regardless, there's a wealth of lovely and attractive lace. Nose is malty and appealing, with a hint of hops. Not bad. Taste is pleasantly hopped, with nice citrus notes and a slight bitterness. Didn't get a lot of the rye in the mix (which is fine with me), just a well-hopped pale ale.

Posted by Goatsden at 7:55 AM No comments: