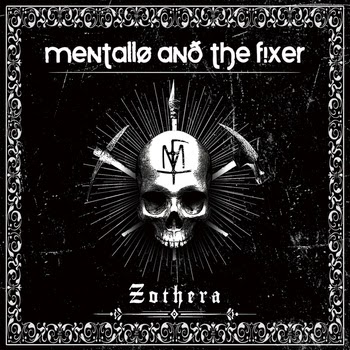 Back in the late 80s and early 90s, when I was editor of a small-press zine centered on “industrial” music, I received a C90 demo tape from Texan brothers Dwayne and Gary Dassing. It was a heaping amount of well-produced sequencer-driven electronic music that bared much resemblance to acts like Skinny Puppy or Front Line Assembly, with elegant strings bringing a beauty and warmth to the hard programmed beats and heavily-distorted vocals.

Shortly after that demo, the band signed to esteemed German electro-industrial-dance label Zoth Ommog, where they released several albums and singles to much acclaim, especially overseas with the growing legions of industrial fans. Personal strife ended the band in the early 2000s, before they regrouped for Belgian industrial label Alfa Matrix in 2007.

This boxed set is a remastered comp of their first 2 albums for Zoth, “Revelations 23” and “Where Angels Fear To Tread”, alongside a third set of unreleased and remixed material titled “Apocrypha”. Looking back, Mentallo & The Fixer were certainly not trend-setters of their genre, yet these early albums do capture a moment in time when this kind of sound was on the rise, and it seemed poised to make inroads commercially, even. Well, that never quite happened, but Mentallo nonetheless built quite a following over Europe with these albums.

There’s not much I can say individually about these albums, as they are quite similar. The lyrics have little bearing as they’re too distorted to decipher without a lyric sheet. I can report that the remastering adds some depth and kick to the already well-produced sound, and the brothers do manage some rather intricate layering of programming (some of which shows an affinity for the Berlin school of synth-sequencer units, and most likely German synth pioneers like Tangerine Dream). There is a moment of respite in the 1+ minute piano interlude, “Bleek Seclusion, but nearly 4 hours of the sequencer stuff starts to grate, so for serious fans of Mentallo’s aggressive electro, this is a heyday. Casual fans like me? Enjoyable in small doses.

Alfa Matrix
Posted by Goatsden at 8:55 PM No comments: 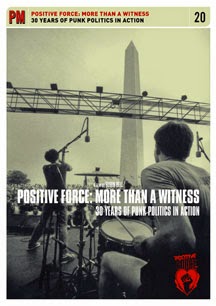 The punk music scene has evolved into a fully-established family tree, with branches drifting away from the original sprout in often surprising and diverse fashions. The nihilism of progenitors like the Sex Pistols or Stooges eventually became a lame stereotype, so punks (particularly ones in Washington DC), partially inspired by the anarchist ideology of English band Crass, became “positive”. This film is a lovingly rendered documentary of the Positive Force movement, spearheaded by the Discord Records roster of artists, and most often associated with Ian MacKaye and Minor Threat/Fugazi, who paved a lot of ground for angry, politically, and socially aware punks.

Director Bell brings together loads of pertinent artists, activists, and musicians here, often with slightly different ideologies, but united to make change. It sounds corny and idealistic, but these are people who are fighting for our own rights, confronting issues like racism, homophobia, homelessness, poverty, war, corporate and government corruption, animal rights, and environmental conservation. Positive Force has been and still is driving change like few others.

This feature-length DVD (which includes a wealth of bonus short films and live performances) boasts of rare music clips, as well as footage both old and new to illustrate the grass-roots movement that Positive Force has driven for 30 years now. Of course, names like Fugazi, Bikini Kill, Nation Of Ulysses, Rites Of Spring, Jello Biafra, Dave Grohl, Ted Leo, Kathleen Hanna, and many more appear here, so you know there are good things going on.

In short, this is a superb document of a movement that may not garner a lot of media attention (naturally), yet is an essential component of our homegrown American music scene. Support work like this, and give this cause a boost, as it can make a serious difference in all of our lives. Word.

PM Press
Posted by Goatsden at 11:44 AM No comments: