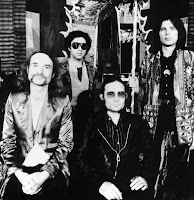 Here's a really fine set of commercially unreleased tunes from legendary German avante-rock act Can...live in Stuttgart 31 October 1975. This lineup included Holger Czukay, Michael Karoli, Jaki Leibezeit, and Irmin Schmidt, and with the absence of a vocalist, this is basically instrumental work (aside from some minimal mutterings on 'Dizzy Dizzy').
If you're unfamiliar with this group's prime work, this is a mid-to-later-period set (around the time of 'Soon Over Babaluma'), but still maintains most of the group's trademark sounds. It's only 4 tracks, but don't be deceived - they are all nicely extended pieces that total up to well over an hour, and the sound quality is definitely soundboard/worthy of release. The opening 'Improvisation' is really a nice jammy sort of almost jazz-rock with Leibezeit's trademark shuffling, funky, tribal percussion. 'Bel Air' is an almost ambient rock piece - pretty well relaxing and exotic. 'Dizzy Dizzy' is tight and groovy, and the 28-minute 'Pinch Improvisation' drifts into a hazy psychedeli-kosmische realm at about the halfway mark. Stunning and transcendent, if you ask me.

Man, this stuff is well over 30 years old, but one listen and you know these guys were way, way ahead of their time. If this were a new band, they'd easily be tagged as 'post-rock', believe it or not! Give it a listen yourself, and feel free to comment.

Forget the Suicide Girls and their glammy burlesque swill. Veteran filmmaker/photog Kern captures the essence of REAL girls, sans the trappings of some supposed or imagined 'scene'. Emerging in the 80's amidst the cacophony of the influential New York noise/scum/rock scene (which spawned monolithic acts like Sonic Youth, SWANS, Live Skull, Lydia Lunch, and grew to encompass Foetus and others), Kern has been creating, on no budget, short films that emblazon the unbridled, uncensored creativity of the downtown NY art/hipster rock elite. He uses sex and violence in often shocking ways to shock and repulse (or titillate) viewers. He's certainly a polarizing artist in this respect.