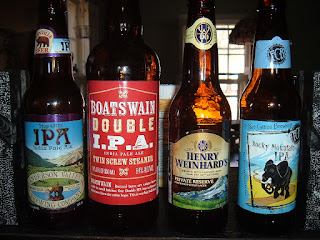 Like it or not, craft beer is here to stay. Here are more reviews for your amusement and reference. Scores are from 1 (awful) to 5 (amazing). Drink and be merry!

Picked up this single after several recommendations on the web. Unavailable in my zip code, so found one in Louisville, Kentucky, at the amazing Liquor Barn.

Pours a dense and cloudy amber, with a thick and sudsy head. Nice. Lace is there, but unremarkable. Nose is appealingly citrus-floral. Not outstanding, but definitely appealing. Taste is sharp up front, but with a heavy malt foundation to smooth it all out. This is an easy-to-drink IPA that shouldn't offend non-IPA fans too much, but doesn't quite cut it in my book. Sessionable? I'd say yes, though, so score some points there, but I wouldn't recommend this one otherwise.

This delightfully-priced ($2.49 a bomber at Trader Joe's Louisville) imperial IPA is an impressively boozy 8.4% ABV, but fails on all other levels.

It pours a hazy, cloudy amber, with a decent two-finger head of off-white suds and a fair fence-post lacing. Not awful there. Nose is mild somehow, though. I don't get a lot of hoppiness. Maybe a hint, but almost more of an adjunct corniness. Huh? Taste is way off balance. This one is heavily malted and boozy. Really disappointing! I can hear an old lady buzzing "Where's the hops?" here. Maybe my bottle was old, but maybe not. A grossly imbalanced IPA and only a good deal if you want to get drunky-drunk.

This cheapie just appeared on local shelves at groceries, so I suspected a major corporation bought out the name. Spot-on, as this once-proud Pacific Northwest name is now owned and brewed by MillerCoors.

Semi-transparent golden in appearance, with decent carbonation. Lace is pretty spotty but present, nonetheless. Nose is grainy and malty. Seems adjunct and corny to me. Taste is mild and watery. No sense of hops at all, despite the bottle's claim. Not sure if this was a better beer before the big boys bought the name, but this one's really pretty uninteresting. Avoid.

I've been quite a fan of Colorado's rich craft beer scene, but there are so many good breweries and beers, only a handful are distributed into my region. Had a chance to pick this up on a recent trip to Louisville, so here goes...

Cloudy amber, with an average head of carbonation. Lace is light and unimpressive. Nose is sticky hops. I get citrus and pine notes. Not bad. Taste is bitter grapefruit, but with a fairly substantial malt backbone. It's a crisp and refreshing IPA, and probably pretty sessionable. Still, this one doesn't seem to have a lot of character, so I won't have much interest in re-tasting unless it's fresh and on-draft.

Posted by Goatsden at 2:49 PM No comments: 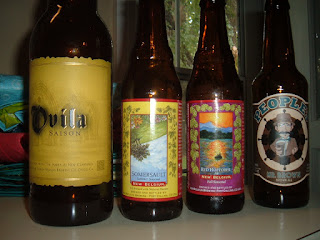 There are so many beers to review, and I am not nearly caught up, so here's a start. Keep in mind, ratings range from 1 (avoid at all costs) to 5 (world-class). Any beer rated a 3.0 or better is worthy, so taste them yourself. There are many bottle shops who sell singles for a dollar or three, so there's no excuse to not have a favorite craft beer. As always, support the independent and local breweries, not the multinational corporate leviathans! Down with corporate beer!

Sierra Nevada is a craft beer giant, and has a peerless reputation for quality brews at affordable prices. This is a special release in collaboration with a monastery in California, and seeks to unlock ancient Belgian traditions in brewing, but to limited success (at least on this particular brew).

This large bomber pours a murky gold, with a thick head of white carbonation. Little trace of lace, though. Nose is fruity and spicy -- displaying a distinctly Belgian-style character. Nice. Flavor is spiced fruitiness (berry, orange), followed by a peppery zing. Alcohol (7%) is well-masked, and this is faithful Belgian-style, but not as interesting as I'd hoped.

Additional notes: The fruitiness (and a dry booziness) comes out more prominently as this one warms.

Ah, this has turned into a Summertime tradition at Goatsden HQ.

Clean gold, with a nice head of fine white bubbles. Big frilly lace. Beautiful. Aroma is grainy, lager yeast, and a little bready. There's a hint of fruit in there, and a little hint of hoppiness. Refreshing. Taste is smooth and rich, with some hint of spice, hops, and a soft tint of fruit underneath it all. Quite complex, especially for a 5.4% summer ale. Excellent, and a brew I always stock up on.

This new seasonal offering debuted in 2012 for the Fall, and I wasn't a huge fan.

Rich ruby in appearance, with a huge head of sudsy off-white carbonation. Thick, delicate lace. Aroma is assertively strong and spicy hops, with a sharp earthiness. Taste is a melding of roasty malt tones with bitter hops smack at the finish. An unusual collision of styles, and not a bad beer by any means, but Red Hoptober is not my favorite of New Belgium's seasonals. I'll hold out for Snow Day and Somersault.

I've now tried several of this Indiana breweries' bottled beers, and haven't been a fan of any thus far, I'm sorry to say.

Hmm, this "imperial brown ale", pours a very dark, almost black. Head is limited, and I get no lace whatsoever. Nose comes across as boozy at first (it is a sturdy 7%, after all), followed by some dark chocolate and fruit notes. Nice. Flavor is chocolate, with some roasted nuttiness in the finish, as well as a slight alcohol heat.  This heavy-bodied brown ale isn't bad, but left me unimpressed in the end. Not one I'd pursue again.

Posted by Goatsden at 1:49 PM No comments:

The Punk Vault and MXV Photography

Long-time friend and ally of Goatsden, MXV (and curator of the famous Punk Vault), now is offering his professional concert photography for fans and collectors.

And while you're out and about, check his review site/blog at:

Posted by Goatsden at 7:56 AM No comments: