David Schow - "We All Scream For Ice Cream (Masters Of Horror)" 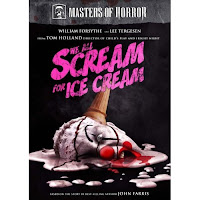 Now this one is a stinker! Okay, ice cream-truck-driver Buster The Clown exacts revenge on the children of the kids who once ridiculed and disfigured him, years before. Clowns are scary, sure, but this one is painful to sit through, with the most mundane, pedestrian teen-horror puns and over-the-top acting. Awful and ridiculous, and most assuredly NOT scary stuff here. Avoid.

Masters Of Horror website
Posted by Goatsden at 8:56 AM No comments: 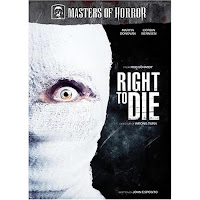 Revenge from the afterlife! Okay, so I'm watching this Canadian-made Showtime horror series, each episode being a mini-movie, directed by sometimes-big-name horror directors. I've seen some good ones (Dario Argento's couple of episodes being in this category), but plenty of awful, rancid, and downright painfully pedestrian ones. 'Right To Die', by Rob Schmidt (of 'Wrong Turn', eh, 'fame') kinda comes up in the middle somewhere.

'Right To Die' is the tale of a husband who gets into a horrible auto accident, leaving his wife basically hamburger. It all gets even more twisted and painful when she haunts him from her deathbed - a payback for his infidelities. Not much depth, but plenty of violence and gore here. Eh, take it or leave it.

Masters Of Horror website
Posted by Goatsden at 8:45 AM No comments:

My favorite song right now, with a gorgeous video. Song from Bonnie's superb 2007 release, 'The Letting Go', with backing vocals by Faun Fables frontwoman Dawn McCarthy, and recorded by Valgeir Sigurdsson. Splendid! Video directed by Jennifer Parsons. This video is available on the 'Strange Form Of Life' CD single, along with 3 other non-LP tracks.

Posted by Goatsden at 8:13 AM No comments:

Sean Penn - "Into The Wild" 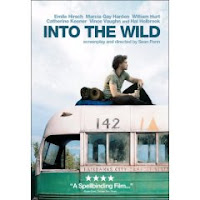 From director and screenplay writer Sean Penn, this survivalist docu-drama succeeds on most levels. Following the true story of privileged college-grad Christopher McCandless, 'Into The Wild' portrays Emile Hirsch as the young 20-something who has been preened and weaned for success in the business world. However, the young McCandless casts away his impending societal life, and all of it's shallow and greedy trappings, in favor of true Kerouac-style adventure. His goal is to reach Alaska, with no money and no contacts. A series of chance meetings with various people on his path galvanizes his goals, and upon reaching Alaska, he settles into an abandoned bus in the harsh and unforgiving wilderness, surviving without human contact or any sort of survivalist knowledge.

Suffice to say, he's not completely ready for such an experience, though his ideals are certainly admirable and he does fare well for a time. The acting is superb - Jena Malone (as McCandless's sister) narrates part of this, and the appearance by Hal Holbrook as a lonely old broken man who befriends and is inspired by McCandless's tenacity is beautiful. Hirsch himself is likeable and passionate in his role, and this one is a definite winner. The score by Michael Brook is excellent, and the songs by Eddie Vedder are fine on their own, but perhaps a wee bit overbearing at times, but maybe that's just my aversion to his voice. Anyhow, I can easily recommend this one, to be sure.

trailer
Posted by Goatsden at 8:03 AM No comments: 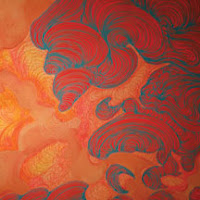 Beginning with the lovely, 12-string majesty of 'The Apple And The Blade', this new Pennsylvania-based group begins their swirly debut trip. 'House Of Fire' collects 9 tracks, with some songs mixed or mastered by Shimmy Disc's Kramer himself, and the sparklingly deep production only helps the group's cause. Appealing easily to fans of stuff like the Brian Jonestown Massacre, Black Angels, or even the early Church, it all sounds very British, and like a stoned-out mixing of 60's jangle pop and modern shoegaze - a really interesting and palatable melding indeed. I really liked this one, as it's consistently catchy (i.e. well-written songs), and simultaneously nicely spacy. 'Don't Go To Hell Without Me', with it's well-placed sitar and woozy vibe, could be a long-lost Verve outtake (high praise), and the aptly-titled 'Lazy' practically defeats Anton Newcombe (BJM) at his own game. Very fine work, and definitely world-class, so if you need a new drone-pop fix, here's your poison. (Universal Warning Records)

The career of the enigmatic Lydia Lunch has been one of constant reinvention. Her work has plumbed the depths of the human condition and (especially) the more violent nature of sexuality. Her own claim that she uses 'sex as a weapon against man' is a tall, and entirely necessary order even today. Her confrontational persona has likely intimidated many an audience, but in reality, this sharply witty and intelligent artist has done a huge part in empowering females in outsider culture, particularly in the face of adversity at the hands of, uhm, men. Sure, you can argue that her softcore films with famed NYC sleaze director Richard Kern may have backfired in some ways, but her tireless and polarizing work has gone on, and this collection of video clips attempts to convey a sense of Lydia's scope and influence over 30 years of recording, writing, and performing.

Beginning with the wildly tuneless no-wave noise-punk of her early band, Teenage Jesus and the Jerks, and continuing to her more musical swamp-a-billy act 8 Eyed Spy (both with her characteristic monotone vox), we are then steered into what I think has been her finest hour, perhaps. Namely, her brief collaboration with the Birthday Party's Rowland S. Howard. Howard's distinctive and unusual junkie-cool guitar shrapnel fit perfectly with Lydia's seductive 'black widow' sensibilities. And live, it seemed to work as well as on record (check out their marvelous 'Shotgun Wedding' CD - if you can find it). We are treated as well to a blistering rock tour-de-force with German group Die Haut (which featured future members of the Bad Seeds and Einsturzende Neubauten). Another highlight there, for sure.

Her 90's era spoken rants follow this, and with stylish musical backing from folks like Joe Budenholzer, they're transformed into a kind of sound poetry (as opposed to primal feminist rally-cries). In fact, this era shows Lydia's work even approaching a kind of elegant mystical and ambient meditational quality (again, in contrast to her early abrasiveness and audience-baiting). 'Knives In My Drain' (with Terry Edwards, Ian White, and others) is even a cool bluesy number that is a kind of spiritual cousin to greats like Nina Simone or Diamanda Galas. A nice twist.

Now, the quality of some of these clips is kinda poor, being mastered from old VHS recordings, but 'Video Hysterie' does as good a job as possible in documenting some of her raw and early music and live performances. It's just a shame that the best part of this 80-minute set isn't even officially a part of the programme. The 15-minute 'Flashpoint' featurette documentary, which traces Lydia's path in music and ideology far better than the bootleg-quality smattering of live clips could ever hope to do, is the definite highlight here. If that were expanded to a feature-length doc, I would be most impressed. So, a bit of a letdown here, but still necessary for anyone who wants to get to 'know' Lydia Lunch without resorting to buying an assload of recorded works. (MVD Visual)
Posted by Goatsden at 7:56 PM No comments: 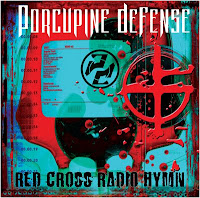 It seems harder to find good, solid electro-rock acts these days that don't tip over into tired techno-pop (future pop, or whatever shite it's being called in the lamer 'goth' clubs this month), or alternately, those that don't reach too far into metallic rock-star cliches.

Porcupine Defense aim to fix all that. This NY-based act, centered around multi-instrumentalist/vocalist/programmer Colin Schwen (formerly of Terminal Sect, reviewed in Godsend way back in 1995 or so), brings out the classic Wax Trax!-styled electronic rhythm lashings, tortured vocals, slash guitars, and ambient-inspired strings like it's never gone out of style. Fans of stuff like 16 Volt, Skinny Puppy, or Ministry should definitely look into Porcupine Defense. And, if it helps, their latest work includes a cover of Nine Inch Nails' venomous classic 'Reptile'. This release, basically a double-CD worth of heavy electronic-industrial destruction, is titled 'Red Cross Radio Hymn', and is available for free download through their website:
Primordial Music
or for further info:
Porcupine Defense site
Posted by Goatsden at 1:29 AM No comments: