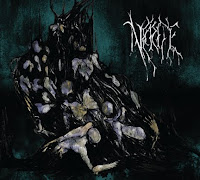 I like these Bay Area guys in that they take the typical black metal template and fuck with it, showing a musical depth beyond their years. "Sic Transit" is their debut, following years of demos and shows alongside such heavyweights as Watain and Enthroned. It's an unusual mix of stylings, from dark ambient to slow-burn to all-out black metal ferocity. "A Mass For The Harvest Of Death", for example, is a 16-minute doom ride, with crawling early SWANS-style tempos and gurgled vocals. It's a churning cauldron of pain and torture that eventually erupts into a blur of speed and fury. "Bereft Of Hope" also follows this template. The 27-minute title track is an epic of minimalist doombient madness, taking turns crossing between funereal textures and raving lunacy. The final track, "Worship The Sunn O))), does just that. It's a downtuned clot of bass rumble-drone straight out of the Sunn playbook. Perhaps not original, but at least they acknowledge the influence plainly. Necrite's debut is a strong and visionary showing, and I look forward to hearing where they go next. (The Flenser Records)

Doors frontman and consummate rock god/sex symbol/dark poet Jim Morrison was a symbol of a generation, and his on-and-offstage antics led to some of rock's greatest recordings, as well as some of the most storied antisocial/substance-abuse tales. Retreating to Paris in 1971 to write, create, and evade the intrusive media, Morrison's self-destructive behaviors finally caught up with him, and at 27 years of age, Morrison succumbed to a fatal overdose of alcohol and heroin.

This 60-minute Canadian TV program merely skims the surface of Morrison's Doors career, and instead examines the songwriter's last hours. His demise, which is portrayed convincingly by actors, is illustrated well. Commentary from associates and historians (as well as a fair amount of archival footage) also helps to paint a descriptive and appropriate picture of the singer's final 24 hours. Sensational? Perhaps, but also a solid documentary of the pitfalls of one of the world's all-time greatest rock icons. (MVD Visual)
Posted by Goatsden at 3:19 PM No comments:

The nearest to royalty that America has likely ever had, JFK Jr. was besieged by the tragic assassinations of both his father and uncle. And though in some ways, he led a charmed life, JFK Jr. was always thrust in the spotlight (whether he wanted to be or not) and the pressure to live up to his family's expectations had to be an extraordinarily heavy burden for anyone. His unplanned exit from this world can be seen as yet another evidence of the supposed "Kennedy curse", or can it?

This 60-minute documentary details the events leading up to the fateful night in 1999 when John (and his wife and sister-in-law) all went down with the small plane he was piloting near Martha's Vineyard. Bits of basic biographical info, photos, film footage, and interviews with colleagues and associates all congeal with believable dramatic recreations to form a palatable and educational look at the man's life. And though obviously focused on Kennedy's premature death (witness the title of this morbid but fascinating series), this one's a well-done and concise look at the short life of an American enigma. (MVD Visual)
Posted by Goatsden at 12:35 PM 1 comment: 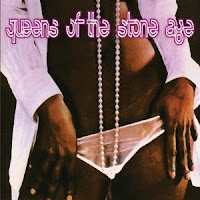 With his impressive resume as guitarist/vocalist for stoner-metal legends Kyuss, Josh Homme debuted his Queens Of The Stone Age project in 1998 with this long out-of-print gem. Now on deluxe double-LP with bonus tracks, this self-titled album (on Hommes' own Rekords imprint) exhibits the diverse sonic palette that Homme and company have since synthesized and perfected in recent years.
"You Would Know" is a weird pop song that's catchy in a Gary Numan-meets-Ween fashion, whereas "How To Handle A White Rope" is a heavy, sludgy rock song with a melodic pop slant. "Mexicola" is a potent stab of thick & meaty post-Hawkwind riffage, and "Hispanic Impressions" is a silly but heavy 3-minute track with no discernible relation to its namesake. Some of the previously-unheard bonus tracks are as interesting as the original LP, with "Spiders And Vinegaroons" being a top-shelf space-out jam with exotic overtones. QOTSA have found the unlikely path between indie rock and stoner metal, and they've followed that vague formula to major commercial success. This debut remains a strong document of the band's formative years, and it's a superbly catchy, creative, and fun album of out-there grooves from the fringes. (Rekords Rekords)

Queens Of The Stone Age site
Posted by Goatsden at 10:35 PM No comments: