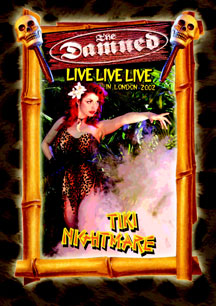 Ah, The Damned remain one of my all-time favorite of the original punk bands. So many classic songs, and they still bring it, even 35 years later! This live show, from London way back in 2002, features classic members Dave Vanian (the band's only constant from their 1976 debut) and Captain Sensible, joined by the always-enticing Patricia Morrison (now Vanian, best known for her work with Sisters Of Mercy), as well as later members Monty Oxy Moron and drummer Pinch.

That all aside, this is a fine show, shot well with multiple cameras and with solid sound. The band's 19-song set begins with a load of later-period sounds (mostly culled from their "Not Of This Earth" and "Grave Disorder" releases), before diving into the rich back catalog. Yes, we are treated to legendary cuts like "Neat Neat Neat", "New Rose", "Eloise", "Smash It Up", "Love Song", and more. The band obviously still has "it", as these renditions smoke with all the great pop-punk melodies and spike-edged attitude of their earliest singles. Sensible and Vanian don't show any age whatsoever here. The bonus interviews (with each member individually) are also quite fun. A must-have for fans. Long live the Damned!

Official Damned site
Posted by Goatsden at 1:12 PM No comments: