Beer: Tin Man - A Review of the Converter Series 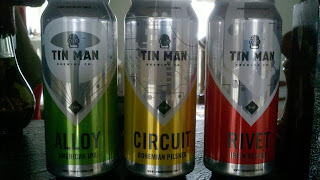 Goatsden and company visited the stunningly tasteful and stylish tasting room/restaurant a couple of times, and enjoyed beer samplers alongside some food (the salmon BLT was quite good). On tap, we sampled the limited Bourbon Rye Dry, which was rich with plenty of flavor. And the Gearbox Black Ale on tap was notably smooth and session-worthy.

So what of Tin Man's pint can brews? From a design standpoint, they are lovely and distinctive. Flavor-wise, though, it's a mixed bag. I gave the entire line some serious time and tastings, and these are my findings. As with all previous beer reviews, the ratings run from 1 (awful, drain-pour) to 5 (exceptional and otherworldly). Anything over a 3 is enjoyable and worthy, so as always, drink (wisely) and be merry!

The India Pale Ale is a craft beer nerd's go-to brew, and Tin Man were wise to put one out initially with their first round of beers. Alloy pours from the pint can a cloudy amber, with a huge and frothy head. Beautiful and heavy lace. Nose is pleasingly grapefruit-lemon citrus hops. Yum! Taste is...mild. The hops are dialed way back here, subdued to well below normal American IPA levels. The body here is light, too, even bordering on watery. I get very little hop snap or bitterness here. I understand that this is meant to be a "gateway" or starter IPA (and not meant for serious hop-heads), but this is weak even for a standard pale ale. Disappointing.

A good German-style pilsner is a real challenge, even to the experienced brewmaster. Needing to be clean, crisp, and light, this is the nearest of Tin Man's offerings to a "mainstream" beer. It pours a clean, golden into my lager glass, with a huge head of lovely foam. Nice and thick lace, too. Nose is malty/grainy, even approaching an adjunct. I get sweet corn and a hint of sharp wheat. Very average. Taste is also grainy and sweetly malted up front, with a sweet corn-like funk up front, followed by a tinge of hops toward the finish. Leaves me with a metallic weirdness, too, which I can't forgive or forget. Not a favorite.

Irish red ales are like red-headed step-children, and thus pretty well ignored by serious beer nerds. But this one pours from the pint can an attractive ruby-amber, with a fine head of off-white suds. Superb and thick spider-web lacing. Nice! Nose is caramel malts, biscuity, and toffee-like. Not bad. Taste is chewy toffee maltiness, with a little toasty caramel in there. This one is easy to drink, and probably my favorite of Tin Man's initial 3 canned offerings.

Note that these are so far only available at Liquor Locker in Evansville, and they are priced at around $11 or so per 4 pint cans. Hmm. When I can get 12 bottles of Sierra Nevada or New Belgium for a dollar or two more, this seems a wee bit steep. I am all in favor of local independent breweries, but the beer has to be of quality, still, and these canned offerings aren't quite there yet.

Final prognosis? Visit the pub/restaurant and enjoy some fresh pints (and try the food), but hold off on the canned offerings for now. I have faith that the brewery will rally and make amends for these lukewarm brews. I will be standing by...

Posted by Goatsden at 4:39 PM No comments: 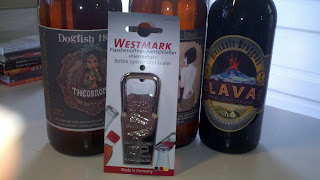 Now, this is a creative twist on a tried-and-true tool. For those of us who can't (or won't) ever finish a whole big beer bomber by themselves, this may well be a godsend. From Germany's Westmark comes a bottle opener that doubles as a bottle resealer. Named, appropriately, "Hermetus", this handy contraption will easily open your bottles. Then, by sliding the other side over the open bottle's lip and pulling it tightly against a silicon/rubber stopper, the bottle is resealed, keeping carbonation and freshness as you rest to enjoy your beverage tomorrow.

I tested the Hermetus a few times, and though it took me a few minutes to figure out (the instructional diagram printed on the actual opener was vague), it DID, in fact, work fine at keeping my beer fresh enough. So score this ingenious tool some points. Useful, unique, and really pretty damned cool, if you ask me!

The Westmark Hermetus retails for $8.95 and is available in the USA from Kaufmann Mercantile.