This is a trailer for another feature-length concert film due in March, supposedly, from one of my favorite bands, Fields Of The Nephilim. There's a double-CD + DVD set and a double-vinyl LP called "Ceromonies"...the elusive Carl McCoy and band live and loud. Magnificence! And check out Carl's appearance on Watain's last amazing album, "Lawless Darkness", too.

Posted by Goatsden at 6:03 PM No comments:

"Where The Streets Have No Name" DVD (director: Vijaykumar Mirchandani) 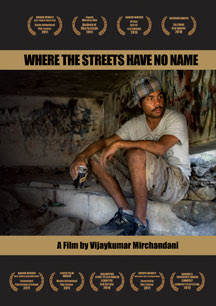 This unusual documentary focuses on the humanitarian work of Dr. Harald Falge, who has spent years fighting to alleviate the plight of homeless and hungry street children in the obscure town of Cairns in Northern Australia.

Falge, a chiropractor by trade, noticed an alarming number of homeless youth in his homeland. Seeing how these kids became entangled in webs of drug abuse and prostitution, he set up programs, often with his own funding, and enlisted others to clean up his town. Falge's tireless work on behalf of Cairns' youth has won him a number of awards, and garnered him international respect.

This film examines this work, and sensitively looks at the reasons and motivations of these children, even following some into adulthood (and stability). Candid interviews with the people of Cairns, and Falge himself, show a portrait of a tropical paradise that was once under threat of becoming a seedy center of illegal trade and child abuse, now moving in the right direction.

A splendid film, and one that should rightfully be seen by any and all. (MVD Visual)
Posted by Goatsden at 7:14 PM No comments: