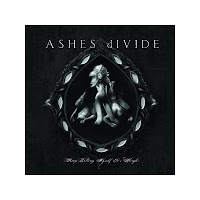 I really liked A Perfect Circle. But it seems that they are, for all intents and purposes, dead. But one thing that must be remembered is that it was really Billy Howerdel's band. Sure, Maynard lent his pipes to the songs, and his presence surely garnered them a lot of attention, but the music itself was chiefly composed by veteran rock behind-the-scenes-man Howerdel. Ashes Divide is his new solo work-slash-band, and here he's accompanied by former NIN guitarist and keyboardist Danny Lohner, former APC bassist Paz Lenchantin, APC/every other band's drummer Josh Freese, and others. Suffice to say, if you liked APC, you will most likely appreciate these moody, atmospheric, and dark electronic-tinged sounds. Sure, it's really quite slick, melodic, and mainstream (read: clean) - along the same lines as stuff like 30 Seconds To Mars in spots (like 'Enemies', which isn't one of the album's standouts), so beware of that, but really, that's my only complaint. Otherwise, it's a quite pleasant if unchallenging modern rock album. There are thunderous drums, nice keyboard textures, Cure-like rainy-day guitars, and Howerdel's perfectly agreeable vocals. Pretty good, really. My favorite cuts include the sad and piano-laden 'Ritual', and the anthemic 'The Pray', with it's uptempo electronic drums and fuzz bass sounds. 'Forever Can Be' could be mistaken for a lost APC outtake, almost. So you already know whether you'll like this one or not. (Island)
website
Posted by Goatsden at 7:03 PM No comments: