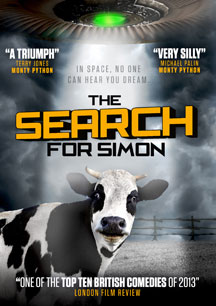 Nerdy manchild (played by producer/director/writer Gooch himself) David is convinced his brother was abducted by extraterrestrials 30 years ago. His continuous search ‘alienates’ him from his friends and complicates what could be his love life. He travels the world searching for clues into the alien abduction phenomenon and relays his findings through a network of internet vlogs. He is a man obsessed, and it takes a series of unlikely coincidences (and a confession from his mother) to uncover the truth that may ultimately set David free.

“The Search For Simon” is billed as a comedy, but it worked better for me as a sad and sweet portrayal of a man on the fringes of sanity and madness who just needs a helping hand. David is well-played by Gooch, being a likable and good guy who just believes wholeheartedly in a truth that isn’t popular nor mainstream. When even his nerdy friends reject him, David finds solace in a lovely young lady who does her best to help him find “the truth” that’s out there.

Well-shot, and with surprisingly good special effects, “The Search For Simon” is an enjoyable and kind-hearted British indie film that has heart and soul, and as so deserves some notice.

And with endorsements from a pair of Monty Python alumni on the case, how could you go wrong?

Posted by Goatsden at 7:05 AM No comments: