Save The Polar Bear

A harrowing look at one of our planet's most remarkable and iconic species...

For more info and to sign the petition, visit:

Save The Polar Bear.org
Posted by Goatsden at 11:35 AM No comments: 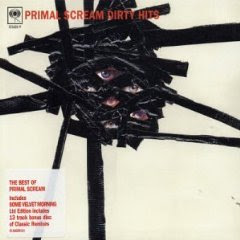 Nobody would accuse Bobby Gillespie of being a great songwriter, as evidenced by this rather uneven collection of singles spanning (most of) his group's career. But he's certainly never been afraid to experiment and take his music into ever-evolving directions, and to varying degrees of success. Starting with the late-80's era Manchester-fop-dance of 'Loaded' and the neo-60's Rolling Stones impersonations of 'Movin' On Up', Gillespie's certainly been influenced by drug culture. The Orb remix of 'Higher Than The Sun' is positively lethargic (rather than lysergic), before 'Rocks' brings on some true swagger. '(I'm Gonna) Cry Myself Blind' harkens back to Gillespie's days in the Jesus & Mary Chain, with it's simple, almost pastoral sad bastard vibe. 'Kowalski', precisely halfway through the disc, is where the real forward movement begins. It's a rough cut-dub that's a signal of the deconstruction that would soon follow.
Amping it up, the songs from the incredible (and landmark) 'XTMNTR' CD of 2000 take control. 'Swastika Eyes' is a blistering, scathing techno-dub attack, and 'Kill All Hippies' is pure funk laced with bitter cynicism and vitriol with it's memorable refrain of 'You've got the money, I've got the soul'. 'Shoot Speed/Kill Light' is a noise-infested shoegazer-punk snarl, like a modern-day Suicide meets My Bloody Valentine - believable as MBV's Kevin Shields produced this one. 'Miss Lucifer' is another techno-terror track that could be the Stooges and Suicide rolled into a modern electronica blender. 'Some Velvet Morning' electrifies the great Lee Hazlewood & Nancy Sinatra gem, and closing it all out, 'Autobahn 66' is a pleasant electro-pop homage to Kraftwerk. Final verdict? First half bleah, second half prime. Invest in a copy of 'XTRMNTR' and get most of the essentials right there. (Astralwerks US)

Primal Scream website
Posted by Goatsden at 10:58 PM No comments: