Hunter Thompson lived the life that many of us envy. His steadfast idealism took him on a journey that certainly wasn't easy, but in the end, he did what, and when, he wanted. The fact that he's an icon of independent thinking and considered among America's most inspirational and gifted writers places him alongside names like Burroughs or Kerouac.

But you can read numerous bios and watch documentaries to get his detailed background, and this is not the place for all that. Suffice to say, this 60-minute TV program chiefly examines, in detail, the last hours of a man ravaged by years of drugs and drinks who felt he was losing the freedoms he'd so gallantly fought for over the course of his storied life. Thompson took his own life in 2005 at the age of 67. His passing caused no speculation nor controversy. He had warned of it years before, and his failing health (coupled with painkillers and bourbon) only served to stoke the internal fires within the troubled man's mind. "Final 24" recreates scenes from Thompson's final hours, and does an admirable job illustrating the scenes leading up to his demise. As well, friends and family are interviewed, so there are valid insights here. As a bio, though, "Final 24" only scratches the surface. That it's merely focused on the morbid aspects of the author's final moments is evidence that there are better and more comprehensive docs out there, and this one's really only for the serious fans and students of Dr. Thompson's life and times. R.I.P. Doc. (MVD Visual) 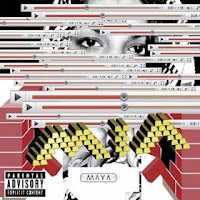 Sri Lankan vocalist/activist/designer Maya Arulpragasam (aka M.I.A.) unleashes her much-awaited 3rd full-length, and it begins strikingly heavy with the clever agit-political intro, "The Message". She's off to a running start, already, which is followed by the proto-industrial "Steppin Up", which could almost be Skinny Puppy with a female vocalist. Granted, her use of abrasive sampled elements in pop isn't unique, but it's especially jarring here. She wisely follows the harshness with what could be the most commercial track of her career, "XXXO". Sadly, this one's a tepid electro-R&B bit that proves her pop savvy, but somehow seems concessionary to these ears. Or could it be she's having a laugh at radio's expense?

Either way, M.I.A. does better with the thumping "Teqkilla" - a more balanced mesh of odd experimental cut-up weirdness and bass-pumpin' club sounds. The remainder of the album is as varied as a pop album can rightfully claim to be, and that's certainly a good thing. "Story To Be Told" is a dub/electronic workout, while "It Takes A Muscle" is a slice of island calypso/reggae. "Meds And Feds" is heavy digital-thrash ala Atari Teenage Riot, but "Space" is light and airy ambient pop. "Born Free" is unashamedly based on Suicide's classic 1977 electro-punk anthem, "Ghost Rider", and it's this kind of clever, in-the-know, and hip pilfering that makes M.I.A. a darling in indie circles. The fact that she lined up Suicide's Martin Rev to play this track on a recent TV appearance lends even more credibility to her cause.

Ambitious musical lexicon aside, it's M.I.A.'s truly worldly outlook that makes "\/\/\Y/\" work so well, despite some slight mis-steps. She points the finger at international government politics, examines human rights, and critiques technology, but its all set to some amazing grooves and beats, so this album works both the mind and booty. Her considerable talents and wisdom are rare among pop stars, and M.I.A. challenges her audience, rather than placates. She is cause for great hope, and "\/\/\Y/\" is a true pop gem. (XL Recordings) 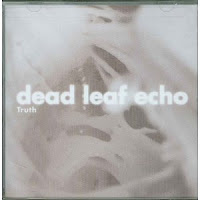 This Brooklyn band's second full-length is a stylish and hazy daydream that harkens back to the classic days of 4AD or Creation Records. In fact, that may be somewhat intentional, as the band recorded this with noted producer John Fryer (Cocteau Twins, Love & Rockets, Xymox, Depeche Mode, etc.). Opening with the gauzy and soft "Half-Truth", the album spins a shoegazey web of moody guitars and passive, androgynous vocals. They lose me somewhat on the silly "Dance In The Light", with its rather redundant lyrics ("Dance In The Light Of Your Soul"? Come on now, folks...) that prove the band is aiming more for mood than poetic realism. The final track is a remix of "Act Of Truth" that goes for a retro-80's synthpop kinda vibe. That said, fans of classic swirl-mope-rock ala Cocteaus, Slowdive, or The Cure, Dead Leaf Echo should be more than pleased by Dead Leaf Echo's dreary and monochromatic goth-shoegazing. (2&1 Records)

Dead Leaf Echospace
Posted by Goatsden at 3:11 PM No comments: