This is too cool...so M.I.A.'s new album, "/\/\/\ Y/\" features a song, "Born Free", that liberally borrows from Suicide's legendary "Ghost Rider" from 1977. That's fine and all. So she has good taste. Now, for her performance of said track on the Letterman show, she's enlisted Martin Rev himself to handle keyboards. Respect. Check this before the network has it pulled or some such nonsense.

Posted by Goatsden at 6:52 PM No comments: 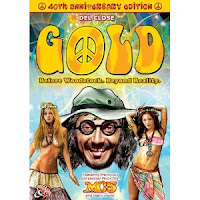 Filmed in 1968, and inexplicably "lost" for 40 years, this indulgent film will make some inevitably feel if it were "lost" for a reason. In the midst of the hippie generation, the filmmakers set out to videotape a large band of young idealists (heretofore referred to as "hippies") as they, well, basically, party! It seems there were plenty of drugs and alcohol on the set, as some of these people (on camera) are obviously quite wasted.

The film's premise is a shallow one, with a vague outline of a plot concerning the youth overturning the backward laws of the "establishment", man. On one hand, it does succeed in presenting the seemingly revolutionary mindset of a generation, as blanked as they were here. The film's part comedy, part parody, part Western, part nudie (more on that later), and really pretty haphazardly put-together. It's messy, sloppy, and likely unscripted, so stretches of "Gold" are almost unwatchable.

A saving grace? The fetching lasses who use every opportunity to expose themselves. And the soundtrack includes several otherwise unreleased tracks by the MC5...so there is some historical value here.
As a time capsule of a time long passed, "Gold" may be of marginal interest, but to anyone seeking further enlightenment, it's simply not here. (Wild Eye/MVD Visual)

Posted by Goatsden at 5:30 PM No comments: