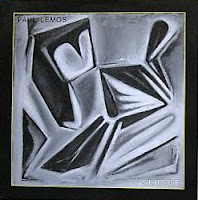 This forgotten oldie from 1989 was released on Dossier Germany, on clear vinyl only, though certain cuts (albeit in different mixes, it seems) have appeared on other Controlled Bleeding releases of the era ("Trudge", "Scourging Ground", "Songs From The Ashes", etc.). In fact, Lemos' "Sludge" could easily stand as a mid-period Controlled Bleeding "best of", as it features a variety of styles and sounds, and includes the participation of both Joe Papa (vocals) and Chris Moriarty (sampling, probably drums). The percussive "Hog Rhythm" flows into the industrial-beat sounds of "Now Is The Time", which recalls both Laibach as well as Skinny Puppy a little - strident and noisy. "Swallowing Scrap Metal" is a brief (under 2-minute) snippet of brutal feedback scarring, recorded live in 1983. Side B features the neo-gothic mutant-opera of "Music For Tape And Voice", and the more subtle 15-minute proto-classical/ambient "In Dark Waters". Really a fine recording that runs the gamut between shredding noise, industrial beat sounds, and weirdo avante ambient. (Dossier Germany)

Posted by Goatsden at 1:27 PM No comments: 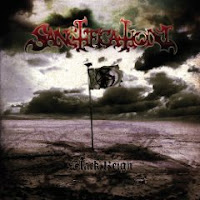 Formed from members of Swedish death metallers Dark Funeral and Hypocrisy, this group spews forth 9 crushing blurs of American-style death metal over the course of a scant 30 minutes. All the trademarks are in place, from the chest-rattling blastbeats, to the throat-gargled vocals, to torrential guitar riffs. In a genre like this, production is uber-important, too, and the work of the Tagtgren brothers (Tommy and Peter) is clear and precise, with just the right amount of crunchy lows and bass response. Very effective! It's difficult to single out any certain tracks here, as it all goes by so quickly, with little time to regroup before the next swell of gargantuan bombast. Lyrics? Are you kidding? They could be singing about Sesame Street for all I care. This crunches, and if classic death metal is your bag, these guys are already better than any Cannibal Corpse I've ever heard.
(Pulverised Records) 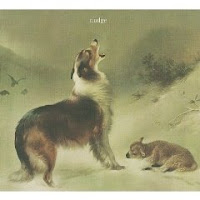 Nudge have both melodies and rhythms (and vocals). But, does that make them "pop" music? In a skewered, left-of-center way, I think it does. A kind of collaborative group featuring members of fellow Kranky acts Valet (Honey Owens), Strategy (Paul Dickow), and Fontanelle (Brian Foote), Nudge's sound encompasses bits of ambient pop, dub, and psychedelische musik, and sounds like a woozy, trippy, and cosmic sound-collision, as seen from behind a foggy, steamy glass window. Opening with the wide-eyed "Harmo", the album veers into more song-oriented (but still drifty) territory with cuts like the obtuse "Tito", before it all settles down to the fleeting closer, "Dawn Comes Light". Throughout, Owens' vocals are sparse and delicate, even almost bluesy in spots, while the music behind her is electronic, quirky, and really quite otherworldly. It's a pop music that isn't meant for the charts. And that is refreshing and commendable. (Kranky)

Nudge on Kranky
Posted by Goatsden at 11:53 PM 1 comment:

Something rather interesting here, and unlikely to make it to America anytime soon. Meantime, you can watch the whole award-winning short film here, as a gift from directors Eddie White and Ari Gibson, two Australian filmmakers who somehow got a certain Mr. Cave to narrate a poem by White...

The Cat Piano from PRA on Vimeo.

For further info on "The Cat Piano", visit their site here.
Posted by Goatsden at 7:33 PM No comments: