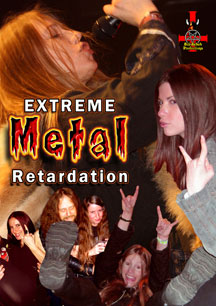 Zebub is a metal journalist and prolific indie filmmaker who keeps his ties to the music world close. I've not been much a fan of his ultra-trashy Z-grade horror films (though some are fun in a silly high school stoner style), but this one held my interest pretty well.

The premise? Zebub, while doing serious interviews with internationally-recognized extreme metal acts, asks them, point blank, stupid questions, and films their responses. So we get a feature film of metal bands responding to Zebub and company's oftentimes offensive questions. Contents include interviews with members of Enslaved, Dimmu Borgir, King Diamond (also featured with a 30-minute serious interview as a bonus feature), Enthroned, Arch Enemy, Voivod, Kreator, and many more. Interspersed with the interview bits are music videos, mostly of the female-fronted gothic metal variety. Merely an afterthought, though, as the interviews are the meat and potatoes here.

Another added bonus here is Zebub's feature film, "Metalheads", which is a re-edit of the 2008 film. It's a pretty well go-nowhere tale of some metalhead stoners who don't have jobs or money, and their relationships with their girlfriends and assorted sketchy characters. Some boobage here, and plenty of obscure metal sounds on the soundtrack, but overall "Metalheads" is fairly unremarkable.

So, final opinion? A fun oddity for serious metal fans. But you won't watch the "Metalheads" feature more than once, so beware. (Bill Zebub Productions)

Bill Zebub site
Posted by Goatsden at 7:27 AM No comments: 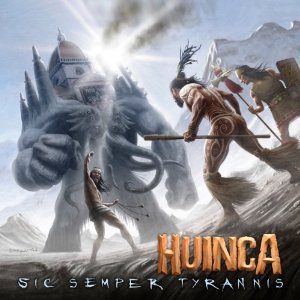 Huinca is a Chilean metal band that embraces their ancient Latin American heritage, and "Sic Semper Tyrannis" is their debut. Opening with the anthemic "Revuelta" (with words in their native Spanish), the band moves to English with the tight and crunchy "Trepador". "Rapa Nui" is a fierce and rolling thrash assault with a hint of tribalism that reminds of classic Sepultura, somehow. "Guerrero" is another standout, with a complex arrangement that bounces from groove-heavy thrashiness to odd textures and playful interspersed interludes. "Tirano" steamrolls, as does the closer, "Who Is Next", which somehow recalls the heavier moments of Voivod. This is a fine album that shows some extraordinary vision and maturity, and I see Huinca as a great metal hope for 2013. (Digmetalworld)

Posted by Goatsden at 7:20 AM No comments: 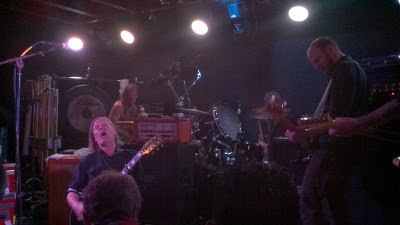 Having seen SWANS in their post-reformation twice before (Chicago in 2010 and Nashville just last year), I thought I knew what to expect at this show, as the band supported their massive 2-hour double-CD, "The Seer". I was quite surprised at the transformation, and although it was a sweaty, grueling evening, I was quite glad to have been a part of it.

Opening the show was New Mexico-based A Hawk And A Hacksaw, led by a former member of Neutral Milk Hotel. I hadn't been familiar with them, but was pleasantly surprised at their odd Eastern folk gypsy style. With an accordian, zither, and violin as chief instruments, the duo of Jeremy Barnes and Heather Trost crafted a wild mix of lively and wordly folk music. Trost provided some vocals in an Eastern style on occasion, but overall this was a lovely and somehow unlikely opener for the juggernaut that was to be SWANS.

When SWANS took the stage at last (it was, by this time, already well after 10pm), the audience went wild, with proclamations of "We love you, Mike", directed at leader Michael Gira, who did little more than smile slyly. The impending aural assault was nothing short of apocalyptic, and it shook the building, sending shock waves surging through the crowd's collective bodies. Even with earplugs firmly in place, this was as loud a band as I've ever experienced in my 24 years of concert-viewing. It was absolutely consuming. Truly.

The songs were more like extended pieces, with a few new album tracks (sometimes expanded and re-vamped entirely) alongside some new improvised pieces (always in transition until recorded), as well as a punishing classic, "Coward", from the band's brutal 1986 album, "Holy Money". Gira conducted his band like a classical maestro, giving them cues to launch into dynamic formation, and waving his hands as if conducting an orchestra. At a few spots, he visibly scolded band members when they failed to meet his expectations. As well, he gave them visible positive reinforcement (a devilish grin) when they did well. This was serious business for Gira, and I'd say his band is well versed in crafting the precise sounds he expects of them.

If the other recent SWANS shows I've seen in recent years were almost transcendent experiences, with extended drones melding with moments of early SWANS-styled force, this one took a more evolved turn into bowel-churning ferocity that resembled a sort of exalted religious experience. Apparently, the band requested the air conditioning be turned off, and the fervent heat and physical force of the music itself was psychedelic. There's no other word for the effect of having one's guts (and ears) eviscerated in such a startlingly beautiful and explosive fashion.

As for the sound itself, imagine a mix of classic Krautrock (Can and Neu! come to mind), early space-freakout Pink Floyd (with wandering moods and atmospheres that evolve and devolve into "songs"), and the band's own trademarked single-minded sonic punishments.

This was a wild and positively cleansing, cathartic experience. My hearing may have been adversely affected, but this tour shows SWANS firing on all cylinders. It may've been over 2 hours of gigantic riffs, noise, drones, and amazing drumming (Phil Puleo is a powerhouse, as evidenced by his closing drum solo), but I was sorry I had to leave.

Posted by Goatsden at 8:16 PM No comments: