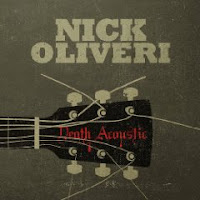 As a former member of desert-stoners Kyuss and Queens Of The Stone Age, you might think you know what to expect from Oliveri. But you'd be wrong. His debut solo recording here combines several Oliveri originals (and versions of songs he recorded with Queens, Kyuss, Moistboyz, and the Dwarves) with covers (Misfits, G.G. Allin). Sure, it's all acoustic, so the songs are drastically different from the revved-up originals, but I get a sense of self-indulgence here. Maybe Oliveri is pulling a fast one? His vocals are tuneless and nearly overloaded (these are home recordings), and the songs are rudimentary and flat. "U Blow" does just that, and is painful to listen to. The Misfits' "Hybrid Moments" is better, but the G.G. Allin closer, "Outlaw Scumfuc" is just plain crap, and serves no purpose being covered at all. Disappointing stuff from an artist with a solid pedigree and surely more to offer than this weak collection of nonsense tunes. (Impedance Records) 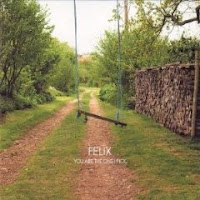 This English chamber folk/pop duo consists of Lucinda Chua (a pianist/cellist who tours with Stars Of The Lid) and Chris Summerlin (guitarist from rock band Lords), and "You Are The One I Pick" is their debut album. It's a sweet, pure sound, with Chua's engaging voice recanting poignant, childlike tales like the lovely "I Wish I Was A Pony". "Waltzing For Weasels" is a sad little reflection, and the ambient, string-laden "What I Learned From TV" is perhaps most like Stars Of The Lid, though more intimate as Lucinda's words impart personal musings softly into the drifty soundscape. As one of Kranky's more straightforward indie outfits, Felix may surprise some listeners, but this classy, stylish, and slightly-askew sound is as sparse and austere as anything else on the fine label. Enjoyable, honest, and evocative music for the sensitive romantic in all of us. (Kranky) 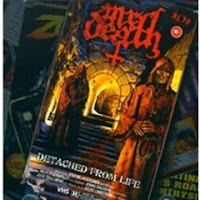 Hailing from Sweden, this new outfit features a former member of Tiamat, and the focus here is on classic, gut-churning gore/death metal. Production by Tomas Skogsberg (Entombed, Amorphis) is thick, clean, and alive, giving the band's crunchy and gutteral attack a powerful wall of sound, with a perfect high/low balance. "Misery's Womb" is among my favorites, with a ripping dual-guitar power-symphony. It's all strong work, certainly some of the finest death metal I've heard in some time. These lads know what they're doing, and they are at the top of their game here. (Agonia Records) 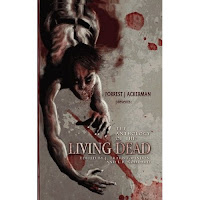 I don't often review books here, but this one is certainly noteworthy, and likely of interest to many faithful Goatsden readers. Compiled by J. Travis Grundon and L.B. Goddard (and personally authorized by the late horror-godfather Ackerman, who provides a wonderously fun intro), this collection of zombie/living dead-themed fictional short stories isn't short on new ideas or twists, and proves to be a surprisingly well-done set of sometimes shocking, sometimes mature-themed, and always entertaining shorts. Personal favorites include Jeremy Boland's clever, humorous, and even charming "Icy Dead People", Sean Douglas's cathartic "fuck-you" tale "Braindead", Andrea Dean Von Scoyoc's twisty "Vindication", Scott Lefebve's apocalyptic "Whimper", and the grisly, graphic, and bleakly-humorous "Suck", by Eric Enck. A honorable mention for Justin Brock-Jones and his "Dead Silence", which takes the classic Romero theme into an angst-ridden post-adolescent direction. Hah! But everything else here is worth a look, too, and this book seriously won me over from the start. Perfect late-night reading for those who dare to imagine a world where the dead walk amongst the living. (Black Bed Sheet Books)
Posted by Goatsden at 10:54 PM 1 comment: 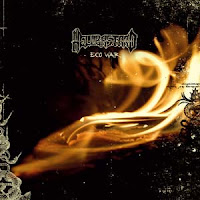 A brief 21-minute selection of tracks not included on their recent full-lengther, "Eco-War" features some fairly heavy and dense punk/metal "crust" from these Earache Records refugees. "Woe, The People" is classic metal with some doomy, sludgy overtones. It's low, dirty, and almost sloppy sounding, though the riffage is righteous and spot-on. "Massacre" is a more punk-oriented cut, with a rollicking chorus and speedier tempo. The final track here, a faithful cover of Slayer's "Die By The Sword" is evidence of some of these boys' inspirations, before a nonsense track ("Kick The Geordie") closes it all out. 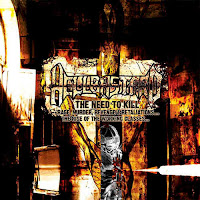 The full album, "The Need To Kill" is similarly full of traditional thrash assaults with some punk accents. Also notable are the interludes, which, in the case of "My Best Friend Misanthropy", break up the crash & burn tempos with whispery atmospheres and sound-poetry. "Justly Executed" is classic, old-school thrash-punk crossover, complete with lengthy solo. Think early Slayer and you'll be right there. Good, solid, mosh-ready tunes that won't offend or shock anyone in this day and age, but nonetheless remain steady and headstrong. Nice work, guys. (Selfmadegod Records)

Talk about change. In just the past 25 years or so, the entire world
of American beer has been radically altered. What was once simply a
working-class staple, in one singular style, has boomed into a
thriving industry ripe with creativity, inventiveness, and innovation.
Brewing styles from all over the world have been integrated into an
international beer culture, with countless independent craft brewers
popping up everywhere and anywhere, each attempting to create a tasty beverage that excites the palate and ignites the imagination, or at least complements a variety of foods. Unusual and complex flavors are now commonplace in beers, as are variations in consistency, alcohol-by-volume, color, and texture. With the influx of artisan brewers, there are plenty of books out there, and it's a lot to take in. Here are a couple I found to be superior, for both the novice and experienced alike. 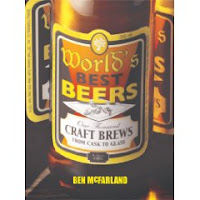 This book, written by English beer statesman Ben McFarland, is a wonderful oversize coffee table-style tome that gives a nice, and relatively deep look into the beverages that the author feels are the "1000 best" in the world. A tall task? Sure. But certainly, even the most experienced beer aficionado will find something he/she has never heard of. Kudos to the author for including some fascinating close-up articles highlighting some of the more innovative craft brewers like Duvel (of Belgium), or the San Francisco-based Anchor Steam Brewery. And McFarland includes an abundance of photos, for those of us who require some visual stimulation. The book does touch upon the basics of beer, and some food pairings, but these are merely footnotes. The photos of the ornate bottles, and concise reviews (with web links) are definitely the focus here. "World's Best Beer" is a hefty, attractive, and colorful travelogue of the world's beer, and thus would make an ideal gift for the beer lover on your list. 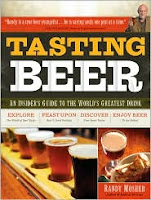 Lovingly crafted by noted beer enthusiast and writer Randy Mosher, this handy softcover reference is a perfect introduction to just about everything about beer, from its' storied history through the ages and continents, to different styles, to how to properly taste and judge a beer. If this sounds a bit academic, don't fret. Mosher's style is very conversational and easy to read. I consider this to be a layman's starting point in brewing and brew appreciation. Really, any of the basics about beer can be found in "Tasting Beer", so this one would make a solid counterpart and accompaniment to the aforementioned "World's Best Beers".
Posted by Goatsden at 7:53 PM No comments: