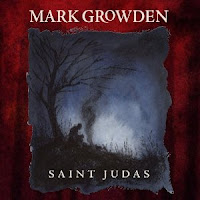 From San Francisco comes this veteran songwriter whose gritty take on dark, bluesy Americana makes him a shoe-in for fans of artists like Tom Waits, Nina Simone, or the Low Anthem. His opener here, "Undertaker", is a raw and soulful lament that recalls the great old bluesmen, though with stronger production, of course. And his group, The Mark Growden Sextet, accents his world-weary voice with old-time arrangements and stylish textures. "Been In The Storm So Long" is another tortured dirty blues number, with a cool swamp-jazz vibe. He re-interprets the classic Leonard Cohen gem, "I'm Your Man", and convincingly makes it his own. Other standouts include the haunting "Coyote", and the melancholy "Inside Every Bird". Certainly, "Saint Judas" is a strong, deep, and mature album for fans of blues that bleed realism, loss, sorrow, and redemption. Superb. (Porto Franco Records)

Growden's label, Porto Franco Records, has given kind permission for the following two Mp3s to be given away from the new album:
"Saint Judas"
"Inside Every Bird"

And check out this new video for "Coyote", as directed by Christiane Cegavske:

Posted by Goatsden at 3:17 PM No comments: 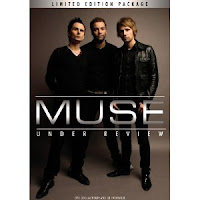 Muse are a band I've enjoyed, but their predilection for sounding like other bands has been their ultimate downfall, in my eyes. Their earliest records (never released here in the states) echoed Radiohead far too closely, and in more recent times, Muse have done the unthinkable, and referred painfully to Freddie Mercury and Queen - blustery, pompous, and even operatic at times. This unauthorized documentary DVD, billed as "An independent critical analysis", does refer to these gripes, but generally goes off the deep end, citing Muse as great innovators, and one of the world's greatest groups. Hooey, I say. Former managers, UK music writers, and past producers are interviewed, and they all speak adoringly (perhaps too much so) about Muse's successes and glories. Taken with a grain of salt (or three), "Under Review" can be an entertaining look at the history of this epic stadium rock outfit, especially if you can get past the sycophantic spirit. (Sexy Intellectual via MVD Visual)