Ministry And Co-Conspirators - "Cover Up" CD 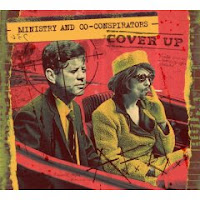 Man, how the mighty have fallen. I have been a fan of Al Jourgensen's many projects since about, oh, 1987 or so. There were the best of times (the mighty 'Land of Rape and Honey', the powerful 1989/90 tour with the all-star band)..Hell, even 'Twitch' was a momentous LP for me. I kinda lost track with 'Filth Pig', 'Dark Side Of The Spoon', 'Animositisomina', et al, as Jourgensen and Barker, it seemed, had stagnated. Fast-forward to about a decade later. Barker is gone, having moved on to the fine U.S.S.A. and other ventures (including the highly-anticipated Flowering Blight). In his (sorely-missed, if you ask me) absence, Al gathered another motley group of metal-heads (and the awesome Killing Joke bassist Paul Raven, RIP brother), and bashed on Bush for 3 albums, which I thought were pretty good, really - incendiary and packed with ultra-fast thrash metal. So here it is, 2008, and Jourgensen has announced the 'end' of Ministry. This collection of covers is the supposed swan song, and man, it sucks balls. Where do I start? The rowdy rock of 'Bang A Gong' and 'Radar Love' are positively idiotic. 'Black Betty'? Pointless. 'Supernaut' is re-hashed yet again. It was cool when it was 1000 Homo DJs for Wax Trax! back in 1990 or so, but here, re-released for the fourteenth-or-so time is just plain lazy. 'Roadhouse Blues', voxed by Fear Factory mainman Burton Bell, is taken from the LAST Ministry CD (why??? It was less than a year ago!), and Jourgensen even dips into the Barker days, re-releasing their dandy cover of Dylan's 'Lay Lady Lay' again. The best here is the finale - a very Ministry-sounding 'What A Wonderful World'. The rest of the disc has guest vocals, flat production, and truth be told, most of it sounds nothing like Ministry should. Bleah. Sorry, but I think this is 12 steps back. (Thirteenth Planet)
Another listen a few days later and I am amazed at how awful this one is...I am sad.
Posted by Goatsden at 2:25 PM No comments:

Another fine and rather eccentric little film by Herzog, this 2004 documentary centers around the British researcher/dreamer Dr. Graham Dorrington, and his life-long obsession with flying. Here, Herzog accompanies Dorrington to the remote jungles of Guyana to test a new form of flying machine - a very small helium-driven airship that owes much to the great zeppelins of the early part of the 20th century. It seems, for the most part, to be a success, though time is devoted to looking back at the death of one of Dorrington's colleagues in a past (failed) attempt at flight. One of the native Rasta crew members, a likeable fellow named Marc Anthony Yhap, is also befriended and his dreams (of re-joining his family in Europe) are touched upon, though never realized (at least in this film). Marc's steadfast friendship with his rooster is also a highlight, painting a picture of a lonely man in a remote area of the world, doing his best to live and love the majestic world around him, but never quite becoming one with it.
Much like the much-publicized 'Grizzly Man' (also directed by Herzog), this is a very individual portrait of a person (Donnington) that most would call a bit 'crazy', but with a passion that is at once beautiful and touching. As with all of Herzog's films (at least the few I've seen), the cinematography is gorgeous (but then again, that goes along with the rich and pristine landscapes of Guyana). Superb film, and downright unforgettable. Werner Herzog
Posted by Goatsden at 6:32 PM No comments: 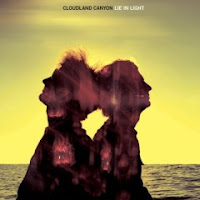 Cloudland Canyon - "Lie In Light" CD - The second long-player from this intercontinental (Brooklyn/Hamburg) collab continues in their tradition of way-out kosmische-kraut grooves and trance-drones. It's a handily modern mix, densely-packed with stoned-out rhythms and trippy effects. 'You & I' is a cool Suicide / Neu! homage of sorts, overlaid with humming, buzzing drones and a robotik, motorik pulse. 'Scheisse Schatzi, Auf Widersehen!' is a glowing firefly engulfing the skyline with energy synthesized from deepest inner space, while 'Heme' is a light and airy flight over the trees at sunset after a satisfying day of imbibery. Come to think of it, 'Lie In Light' echoes this narcotic, drifty vibe, in an almost Spiritualized sort of way, and 'Mothlight, Part 1' continues in this melodic, rock-oriented fashion. Really astoundingly resonant and brilliant work, tailormade for those who wish to 'travel' a bit with their music. (Kranky)
Posted by Goatsden at 10:23 PM No comments:

Comrades: Will tha D (driver of doom), Chris-T (navigation x-ecutioner), Cori (Gamemasta-C). This drive to St. Louis was smoooove as could be, with prime weather and plenty of daylight. On the way, I was impressed and surprised by the sheer amount of over-flooded areas in Illinois...farmlands completely under water, like monstrous lakes. I'm sure that much of the highways were impassable just a couple of weeks back. And I thought my area was bad with the 7-8" of rains! I am only sad that I didn't have a camera. As I've been told, these were 'once in a hundred-year' rains.

Anyhow, we arrived in St. Louie without incident, and proceeded to hit our favorite restaurant on the strip by The Pageant...a little hole-in-the-wall called simply 'Thai Cafe'. After a too-long wait for our food, my Pad Thai was fine (though rather mild), and the Thai iced tea yummy enough. We skipped on over across the street to the club and got right in, even managing to snag prime balcony seats in the center. A most triumphant time! I remember seeing Sigur Ros there the second time (with Cori) and having to share one barstool off to the side. Talk about sore backs..but not this time.

Anyhow, after having some nice draft Fat Tire ales, we watched the opener, Lichens, and his brand of primitive drone/trance rock. The audience mostly didn't seem to care for Robert Lowe and his drifty soundscapes, complete with bird calls and vast waves of sound from only a guitarist, his voice (and sometimes additional guitar), and a stack of effects pedals. I think Lichens' sound is positively transcendent and beautiful, though it seems a large venue like the Pageant wasn't the best setting for such a personal type of music, as evidenced by the crowd growing perceptibly impatient with the non-'rock'-oriented music. After 20 or so minutes, the din of the throng's chattering threatened to overpower the blissfully pure music on-stage. Sad, but true, at least from where I was seated. Lichens set lasted about 40-45 minutes or so.

When Explosions came on, the large crowd was ecstatic with cheers, whistles, and applause. It was the Texan group's first trip to St. Louis, and they seemed surprised to command such a large audience. They tore into plenty of tracks from their various albums, moving effortlessly from the gentle guitar pluckings and melodies to raging torrents of ear-shredding noise. And for a purely-instrumental act, the band exhibit a good share of stage charisma, never going motionless for long and always seeming to give their instruments a solid workout.

If you're not familiar with them, Explosions are a pretty close counterpart to their brethren from Scotland (Mogwai), Iceland (Sigur Ros), or Japan (Mono), though Explosions don't usually pummel quite as hard as the 'Gwai or Mono, and with less preciousness than Sigur Ros. Their extended songs are simultaneously sad and hopeful, and always meditational yet 'rocking'.
Incredible show, really, and as the lady and I took in a couple of Long Islands (each!) after our beers, we got pretty, umm, hammered. A planned post-show trip to a local liquor store to track down some fine Fat Tire (or other New Belgium craft beers) was well-gone and forgotten in our haze. Maybe next time. Live Photo credit:?? from the eits German fan page.

EITS
Posted by Goatsden at 6:20 PM No comments:

Murder By Death with Kiss Kiss and O'Death - Uncle Fester's, Bloomington IN 03.27.08

Comrades: Chris (navigator) and Will (sleeper). Our trip to Bloomington was troubled from the start, as our Mapquest directions (and my lagging memory) sucked. Going up there (to B-ton) was also trying due to excessive drizzly rains, which hindered our usual speedy driving. We eventually made it to IU country (Bloomington) and succeeded in hitting our prime source for pizza (best I've ever had): Mother Bear's. Apparently, this place is known around the country for it's creative and expert pizzas, and it's no wonder. Delicious! My Monet pizza (spiced chicken, white sauce, peppers, onions) was superb, though the peach iced tea was kinda average.
We had plenty of time still to find Uncle Fester's, which is located on the main strip of Kirkwood Avenue, only a few minutes away. Smallish club, nice balcony, well-done bars. We found some decent balcony seats and I enjoyed a Newcastle Brown Ale. The first openers were Kiss Kiss, and they were a fair mix of emo-ish vocals and heavier rock (and an unusual electric cello). Not bad, but not something I'd pursue, either. O'Death were next and really had a difficult time winning over the audience who were there to see hometown heroes MBD. O'Death played a mix country and thrash, with awful vocals and a tight rhythm section, although their set went on far too long. Suffice to say we all agreed that we hated them (and yes, Chris, you were right). MBD appeared at last (around midnight-ish at least), and to our surprise, their old keyboard/piano player (Vincent Edwards) was in tow! His addition made some of their classic songs that much deeper in sound, and it really helped make this perhaps one of the best MBD gigs I've seen (and I've seen several through the years). Murder By Death put on a powerful show, and certainly commanded the stage better than either of the openers. If you haven't heard these guys, it's a cool and individual melding of narrative songs (with a kinda dusty Western vibe) and indie rock with a cello (courtesy of the enigmatic and unforgettable Sarah Balliet, who plays like a madwoman). It was a good time, and though trip home was also a bit of a hassle with heavier rains and a very late hour, we had plenty of fun. Photo by Bill Adams from the MBD website.
Posted by Goatsden at 5:08 PM No comments: