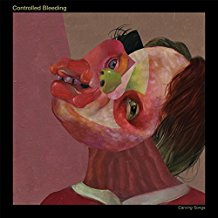 A heavy-duty revisitation and reinterpretation of Bleeding’s “comeback” album of 2016, this expansive double-disc set opens with the new track, “TROD (Defiler’s Song)” — a wild and hardcore mesh of noisy thrash-edged rock (actually not far from the group’s old Skin Chamber project) with a more subtle electronic angle. It’s potent and downright frighteningly intense. The other tracks here, mostly remixes, alter the group’s diverse sounds into even more unique and unusual feels and sound-worlds.

Highlights of disc 1 include former Chain Reaction minimalists Monolake delayering/remixing “Carving Song” into their own austere rhythmic drum-loop style. “As Evening Implodes (Barnacles Remix)” brings a gentle and moody seaside strings vibe that serves as a pleasant interlude. The long-lost Renaldo & The Loaf take “As The Evening Fades” into a rich playground of exotica and, strangely,  animal sounds. JK Broadrick slices “Swarm” into a roomy, blackened, near-Godflesh slab, while the legendary Ramleh brings “As Evening Fades” into an opium den-soaked gauze of psychedelia. Rothko’s “Garage Dub” is a shoegazey wisp of ambient jazz, if that makes any sense, whereas ambient composer Tim Story remixes “Needle Evening” into a shimmery vapor-trip to finish off the disc.

Whereas many “remix albums” sound more like compilations (which they, by nature, are), Controlled Bleeding’s already vast musical terrain and the experimental tendencies of the remixers here make for a consistent and cohesive double-album that complements well the group’s uniquely visceral vision. This is not rock, nor jazz, or even industrial. Just call it Controlled Bleeding.

Artoffact Records
Posted by Goatsden at 3:26 PM No comments: 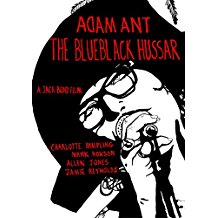 Seemingly near-forgotten as a major player in the 80s music and style scene, Adam Ant (and his previous post-punk band, Adam & The Ants) have unjustly become just side-notes during “80s retro” playlists. Jack Bond’s film “The Blueback Hussar”, isn’t a full-on documentary of the inspirational Adam Ant, but rather a behind-the-scenes look at Ant’s 2011 return “tour” of England. And scattered it is.

After he dropped from public consciousness in the early 90s, Ant had a series of troubles related to his bipolar disorder that landed him in the courts and basically belittled him to little more than tabloid fodder. Bond’s look at Ant is unflinching and only a bit sympathetic, allowing Ant’s larger than life charisma and swinging personality to take over. At times, it’s sort of sad, seeing Ant (known to his parents as Stuart Godard) parading around like he was a major rock star still. At other times, it’s refreshing to see him retaining his persona through it all. His swagger and unapologetic personality is infectious and somehow inspiring.

A must-see for serious fans, or anyone interested in seeing a detailed and unflinching “where are they now” portrait of an eighties icon. 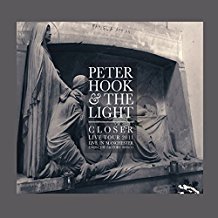 Peter Hook and his band The Light have a right, a legacy and a license, to cover the immortal Joy Division (and early New Order). Even more so as the rest of New Order are busy releasing tedious and vapid disco pop and generally ignoring their inspirational and innovative roots.

Fans like me were either too young (me) or just not around during the prime eras of the Manchester bands’ heydays, so Peter Hook and The Light are the closest we’ll ever get to seeing and hearing Joy Division’s material or the earliest (and best, in this writer’s opinion) New Order tracks in a live setting. Hook had a prominent part in these band’s sounds, and his re-claiming of them is a true godsend for fans of all ages and eras.

All that said, these 4 CD releases of live shows from 2011-2013 capture the feels and vibes of the great studio recordings in top quality. Hook’s vocals are admirable and quite close approximations to Ian Curtis’, and his band, which includes his son Jack Bates on bass, cover Joy Division and New Order’s finest work with respect and power.

“Closer Live Tour 2011: Live In Manchester” is a 21-song, double-CD set of album and single cuts, closing with (pre-Joy Division) cuts “Warsaw” and “Failure”, and climaxed by the legendary “Love Will Tear Us Apart”. “Colony” and “Atmosphere” are sung by former Happy Mondays and The Light collaborator Rowetta, bringing a soulful and reverential side to the “covers”. Overall, a great addition to any Joy Division collection, and a riveting live set. 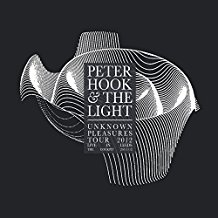 “Unknown Pleasures Tour 2012: Live in Leeds” is another double-CD, including 24 tracks (with minimal overlay of the “Closer” set). The entirety of the great “Unknown Pleasures” LP is performed here, of course, alongside another wealth of other cuts from the era. As with the “Closer” set, it all sounds top-notch, with a post-punk fire that does the originals proper justice (and even reanimates them into a new era). “Interzone” or “The Drawback” out-punk the younger generation, and classics like “Transmission”, “Love Will Tear Us Apart”, and “Ceremony” close it all out with intensity and passion. Hook and his boys know these songs inside out, and these albums do them a great service, bringing it all back to life again. 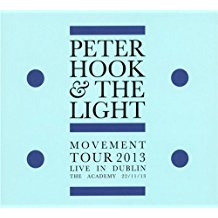 “Movement Tour 2013: Live In Dublin” is a single disc and opens with 7 Joy Division cuts, including faithful and intense covers of “Incubation” and “Autosuggestion”, as well as “Ceremony”, before hitting the New Order debut LP, “Movement” and the album’s great opener, “Dreams Never End”. This album was a sort of middle ground from the band’s previous Joy Division incarnation and their more electronic and dance-worthy future as New Order. It echoes Joy Division’s starkness and raw post-punk sound, only hinting at the group’s lighter future. Hook’s band pound through the brief album’s 8 cuts before hitting a few New Order single B-sides. In all, it’s 18 tracks here, well worth any fan of either band’s time and cash. 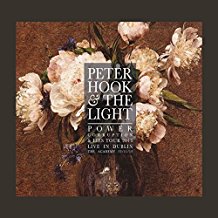 “Power Corruption & Lies Tour 2013: Live In Dublin” is another single disc, with 14 tracks beginning with early New Order favorite “Everything’s Gone Green” before hitting the band’s second album in it’s entirety. The band transitioned from the darkness of their earlier work with this electro-pop album that had great tracks like “Age Of Consent”, as well as lighter, funkier cuts like “586” that don’t hold up as well. Favorites like “True Faith”, “Temptation”, and “Blue Monday” are used as finales alongside “Love Will Tear Us Apart”, closing this chapter in Hook’s homages to his past works. Of the 4 albums released here, this is the one that to me seems a bit less necessary. Nonetheless, it’s a solid work that invites further re-investigation into New Order’s earlier releases.

Overall, Hook and The Light do great justice to these classic albums, leaving any serious fan impressed and relishing the originals, yet making a new life for them as well, keeping them alive and making them as much about “now” as “then”. Bravo.

Westworld Recordings
Posted by Goatsden at 4:36 PM No comments: 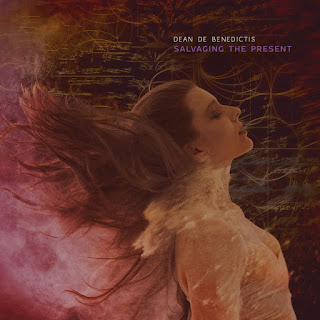 Veteran composer De Benedictis has been around for some time, and “Salvaging The Present” is a unique melding of elements from various musical streams, gelled into an immersive and uniquely inventive and personal mix that would easily function as a soundtrack to a playful surrealist film.

Opening with the curious “To The Ends Of Elation”, which joins elements of prog-rock with immersive ambiance, De Benedictis brings together unusual and often disparate elements into his hallucinogenic sound stew. “Micro Souls Anthem” has a similarly upbeat and lively vibe with nicely deep mixing. “Pagoda Tiempo” uses a sampled and effected slice of dramatic orchestral strings before drifting into a more celestial ambience. Just beautiful and so very effective. “Never The Sacred Stretch” could easily function as an electronic soundtrack to a surreal interpretation of “Alice In Wonderland”. “The Purity Of Season 279E” brings to mind a rolling Western desert landscape, somehow, whereas “Whisper County” is a gentle reverberation from times past, as remembered from a wooden porch and a rocking chair. “Regret In G (The Sky Remembers)” closes it out with a drifty, almost shoegazey haze.

De Benedictis isn’t afraid to cross genre boundaries, and calling this an “ambient” album is a disservice. Aspects are there, but “Salvaging The Present” is a modern electronic music journey that doesn’t have limits or boundaries. It’s a journey that I’ll want to make again.

De Benedictis site
Posted by Goatsden at 7:03 AM No comments: 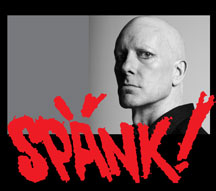 The enigmatic former co-frontman for KMFDM and Pigface here releases his second true solo album, and it’s a solid, enjoyable electro-rock album that falls right in line with his past work, with elements of hard rock and metal as well as clubby dance elements.

Opening with the club-metal of “12345” (which features a guest appearance from Tim Skold), the album heads into the anthemic “Hard On”, which would fit well on any KMFDM album. “Give The People What They Want” recalls Esch’s 1993 solo album, “Cheesy”, with a groovy electro-funk grunge sound. “Soul To Steal” is a trance-electronica cut that brings the exotic vocals of Trixie Reiss to the forefront. Further cuts bring present En Esch’s sense of humor (as in the silly interlude “I Hop”) before diving back into his aggressive rock-dance melding (the menacing “No Guts No Glory”). En Esch has retained the sound(s) that made him famous so many years ago, as well as kept the sense of experimentation that seems to have left Sascha’s KMFDM a long time ago. As much as I hate comparing En Esch’s work 20 years later to his formative act, the link is still there, and En Esch does it as well or, in many cases, better.

Posted by Goatsden at 5:59 AM No comments: 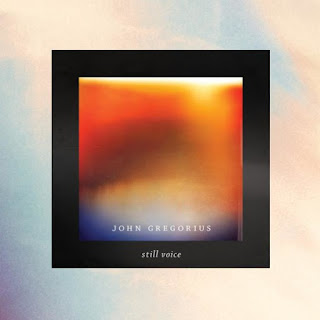 Veteran guitar player and producer Gregorius has found his niche with this collection of melodic, ambient guitar works that generates a warm and pastoral existence, uncluttered by trends or genre. The opener, “Grounded In Mystery” is simply a beautiful and gentle wisp of soft harmonics and fleeting guitar.

Gregorius’s songs are essentially heart-lifting soundtracks to films that don’t (yet) exist. His soft guitar melodies are placed simply atop beds of electronics and processed guitar, crafting an instrumental pillow of dreamily introspective ambient “pop”. “Benevolence” picks up a wafting rhythm, but remains a positive and reflective tone. “True Self” brings an almost droning post-rock, shoegaze vibe and works amazingly well.

“Still Voice” is a lovely, heartfelt, and emotive album of gentle ambient guitar compositions that I very much appreciate after too much angry noise and cluttered sounds. It’s the perfect album to wind down to, and Gregarius is a highly skilled composer who I’d love to hear more from. Bravo!

John Gregorius site
Posted by Goatsden at 8:03 AM No comments: 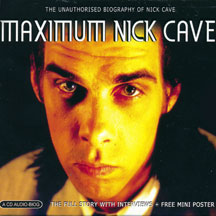 This unauthorized “CD-Audio-Biog” is basically a rather dated 55-minute narrated history of Cave’s career up until 2005 or so. There are several interview audio clips, with Cave himself here, but overall, this CD is a rather thin and unnecessary document that seems aimed at fooling Cave fans into unwitting/unwilling purchase.

The rather basic biography of Cave’s history is spoken by Sian Jones, whose voice recalls a British newscaster, and incidental music by Amanda Thompson are only slightly interesting. Jones’ gross mispronunciation of Einsturzende Neubauten is pretty awful, and this package’s lasting impact and replayability are quite limited.

Serious Nick Cave fans — pick this up only at a drastic discount, as there’s very little here to learn about the legendary songwriter and frontman.

Chrome Dreams
Posted by Goatsden at 6:38 AM No comments: