A good brew on a hot summer day! Beers of August 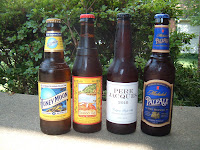 Hooray for beer! Where I am, the summer sun and humidity are oppressive. Beer seems to help sometimes, especially the lighter seasonals as sampled here. Keep in mind, my reviews run from 1 being outright undrinkable dysentery-causing bongwater to 5 being life-sustaining nectar of Valhalla. Remember to support your local and micro-brewers. The future lies with them, not your major corporate macro breweries. Make your beer personal and buy local. So with no further ado, let's get on with the beer reviews, shall we?

Blue Moon's summer seasonal is a clear amber wheat ale brewed with clover honey and orange peel for added zing. The flavor is overwhelmingly sweet, and heavy on the honey, though Honey Moon feels lighter and less filling than the signature Blue Moon, so it's a better fit for those steamy summer days. Pretty tasty stuff...not too complex but refreshing just the same.

This clear golden ale is New Belgium's summer seasonal, and it's among the brewery's lighter offerings. The flavor is mild and malty, with a slight hoppy character and a hint of citrus. Oddly, I place this one curiously between a traditional lager and a pale ale. It's certainly tasty, and unique. Like most of New Belgium's employee-(and Earth-) friendly brews, this one's quite satisfying.

Saved this powerhouse for last, and for good reason. It's a limited edition ale that, in the grand tradition of classic Belgian ales, is bottle-fermented with active & living yeast, so aging further develops the flavor. But I'm not waiting to write this review, so off comes the bottle cap and into my glass it goes. Hmm. It's a nice opaque amber in color, with an odor of bourbon (indubitably the strong 8% alcohol content), candy sugar, and maybe grapes. The flavor is sweet, with an unmistakable muted burn. Definitely a brew to savor. The beer snob in me says to rate this one higher, but I can't help but feel it needed some time/aging to reach its full complexity. As it stands, strong and hearty, but lacking individuality.

This attractive amber pale ale pours with good lacing. The appealing floral/hoppy aroma also bodes well for this craft macro. But that's all window-dressing. What's it taste like? Well, Michelob's Pale Ale has a brisk and balanced hoppy character, but it's not too acidic or strong (nor complex) as other pale ales. A sturdy, solid beer -- not memorable, but a good representative of the style, and a nice place to start.
Posted by Goatsden at 10:04 AM No comments:

Beer From The Heart of Summer 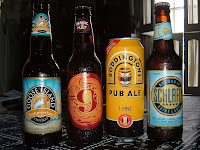 Making up for lost time in Goatsden World Headquarters? Indeed we are. Here are my periodical beer-tasting results, all rated according to my own personal judgments and (maybe) knowledge. I give the brews scores from 1 to 5, with 1 being piss water and 5 being ambrosia. As per my usual cheerleading, please support your local breweries...where the beer is freshest and created by artisans who love what they do, not by robotic marketing teams who are out to take your valuable cash money! Long live indie brewers and craft beer supporters!

GOOSE ISLAND SUMMERTIME (Chicago, IL) - 4.0
Goose Island has always been hit and miss with me, but this clear golden kolsch is really enjoyable. It's not as light as appearances would normally dictate (this one's clear and pale golden), as there's a crisp maltiness, followed by a light mix of hops and citrus. A delicious and sturdy (but not imposing) brew that's worthy of praise.

MAGIC HAT #9 NOT QUITE PALE ALE (S. Burlington, VT) - 2.5
Clear and golden with a sweet and fruity scent, this one begins innocently, but upon first tasting, a weird fruit-infusion comes through. It's overly malty and not appealing to my nose or taste buds. A hint of hoppiness peeks out a little, but the overwhelming taste I get is that of artificiality. The beer taste seems far too obscured by a strange, unnatural flavor. Nay.

BODDINGTONS PUB ALE (England) - 2.0
It's been a lot of years since my last taste of Boddingtons, and the novel "draughtflow" system (in an aluminum pint can, no less) does manage to create a strong and foamy head , but this dissipates quickly and what's left is a pale imitation of a beer. It's an amber ale with a bland taste - malty and watery without any real personality. Far too plain and uneventful for me, sorry.

SCHLAFLY HELLES-STYLE SUMMER LAGER (St. Louis, MO) - 4.0
Now this is more like it! A pale, golden appearance with strong lacing and a very fresh, almost grassy scent opens the proceedings. The taste is strong, zesty, malty, and with a brisk and sharp flavor profile. This is a tasty treat, light but brimming with flavor. Quite enjoyable, Schlafly can be relied on for some quality beers, no question!
Posted by Goatsden at 9:17 AM No comments: 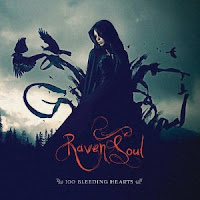 Wow. It's a Portuguese goth-metal band who cop more than a view moves from Finnish icons H.I.M.. In fact, this "Twilight"-ready group are just as melodramatic and love-obsessed as their dark spiritual "fathers". Musically, Raven Soul's melodic goth-metal is light and easy on the ears, replete with plenty of synths, pianos, and guitars that are tuneful and clean. Their production is crystalline and deep, so it all sounds good. However, it would sound better if I hadn't heard H.I.M. first. Vocalist Mac Caetano manages to channel both Peter Murphy and Ville Vallo on the opener, "End Of The World". From there, it's strong album, but far too derivative to these ears, merely shadowing their H.I.M. heroes. I'll cut them some slack as it's their debut, but I'd expect something more individual next time. . (Arctic Music)