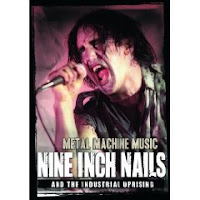 A curious account, this one. It's basically a NIN bio, completely unauthorized, but legitimized by the participation of former Nails Chris Vrenna and Rich Patrick, who have both gone on to successful careers in their own bands (Tweaker and Filter, respectively). Other writers and critics also have their say regarding Trent Reznor's rise, from his synthpop roots to his well-publicized battles with former record company TVT, to his recent experiments in alternative marketing and his successful back-to-DIY aesthetic. It's a solid and critical appraisal of NIN's albums. Clips from promo videos and live footage bolster the film well, as do some fine interviews with Jared Louche (of Chemlab) and Eric Powell (16 Volt) - both peers of Reznor. On the other hand, at least one writer featured here is purely sycophantic in his adulation/adoration for NIN...good for a chuckle at least.
What's most curious about this DVD is the first half-hour or so, which takes a whole different tact entirely. This is an examination, albeit a rather shallow one, of the beginnings of so-called 'industrial' music - highlighted (and indeed, made by) an extensive interview with Genesis Breyer P-Orridge. It's telling and fascinating, hearing it in her own words. Bits and pieces of live footage of Ministry, Skinny Puppy, Throbbing Gristle, Einsturzende Neubauten, Cabaret Voltaire, and Depeche Mode (??) litter this pre-NIN history. It's nice, though far from thorough. I'd really love to see this all expanded upon, with other important inspirations like Varese, Kraftwerk, Test Dept, Whitehouse, Boyd Rice, Front 242, and others included. But that's a whole different story altogether.
As it is, this 2+ hour documentary is an exceptional watch for NIN fans - offering some insight and rare footage. Maybe it is a bit surface, but this may be as close as we'll ever get to a true and definitive bio of Reznor and his NIN persona. (Chrome Dreams/Sexy Intellectual)
Posted by Goatsden at 12:04 AM No comments: 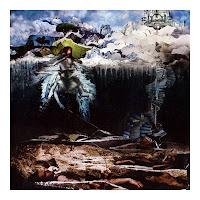 Frusciante's day job as guitarist for the Red Hot Chili Peppers may be his best-known gig, but it's far from his finest work. When he's not touring or recording with mates Anthony, Flea, and Chad, John rounds up a few (other) friends and releases often wildly-disparate solo recordings. His latest, recorded from 2006 to 2008, combines his ever-growing sense of melody and pop songwriting finesse with his predilections for out-there sonic explorations. 'The Empyrian' is a modern-day psychedelic masterpiece, with narcotic, drifty textures and woozy, mellow arrangements. His lulling and starry cover of Tim Buckley's transcendent 'Song To The Siren' is apt and well-done, and 'Unreachable' is a trippy and floaty rock song packed with space and depth. 'Dark Light' begins introspective and ambient before transforming into an inspirational pop song (perhaps the closest to the RHCP he gets on this fine album). Other tunes are tuneful and flighty ('Heaven' is sweet and nicely orchestrated).
Frusciante's become a wholly confident and infinitely stronger songwriter since his rather embarrassing early albums (the result of a very horrific drug habit long since banished). 'The Empyrian' is the culmination of years of experience, and this is the sound of a man who's seen life from higher highs (and lower lows) than most of us rightfully should. He's a worldly-wise head with a need to move beyond mind and body, and this album is perfect for such space travels. (Record Collection)

John's personal site
Posted by Goatsden at 8:44 AM No comments: