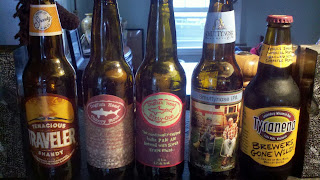 More beer reviews, here from some major players in the national craft scene. And plenty of fine tastings here, too. I shan't explain the scorings -- every post around here breaks it down. Suffice to say, all of these 5 brews are worth your time. Enjoy a craft beer today, and down with corporate beer!

This one is from "Traveler Beer Co." - actually a pseudonym of Samuel Adams. Why, I don't know. It is a solid and highly drinkable mix of lemonade and wheat beer, this one with a ginger infusion.

Pours a cloudy orange, like a ruddy hefeweizen (the wheat beer foundation shines through), and with substantial off-white carbonation. No lace, though. Nose is spicy ginger, with a touch of lemon citrus. Not extravagant, but appealing. Flavor is dominated by the ginger infusion, but with touches of smooth and sweet honey and some lemony citrus.

Not a terrible shandy, and surely quite refreshing on a hot day.

Dogfish Head is among the elite American craft brewers, and one of the most experimental in the craft scene. This seasonal stout uses such ingredients as roasted chicory, Mexican coffee, St. John's Wort, and licorice root.

Pitch black, with a full head of tan bubbles. Nice spoke lacing. Nose says coffee, and rich chocolate. On the right track. Taste is rich and flavorful, with coffee and chicory coming out pretty forthright. I also get a hint of cocoa in there.

A smooth and balanced stout with plenty of character. This one's a winner.

Another unusual concoction from Dogfish. This is an American IPA (Dogfish 60 Minute IPA), with added Syrah grape must. So, in effect, this is a sort of beer/wine crossover! And a successful one.

Pours a rich and semi-opaque ruby. Thick head of fine white bubbles -- with a definite purple tinge. Big loopy, but not particularly attractive lace. Nose is appealing and fruity, with grapes and dark berries dominating. The hops seem quite dialed down, or else just submerged/obscured. Taste is a brilliant blend of sour fruit (the Syrah grape must) and some crisp citrus hoppiness.

Very tasty, refreshing, and certainly not a taste I've experienced before in my 1200+ beer-ticking career! Another fruit beer that does not suck!

New Hampshire's Smuttynose is a major East coast player in the craft scene, with some well-regarded offerings. I'd never had a chance to enjoy one, until now, thanks to Hometown Liquors in Henderson, KY.

Pours a murky golden-amber, with a lush and extravagant head of white suds. Lace is thick and extensive. Nose is citrus and floral/herbal hops. Flavor is bitter on the acidic citrus/grapefruit hops, with a nice dose of sweet and sticky malts to balance it out a bit.

Finestkind isn't a hop-bomb by any means, but it is a solid American IPA.

Wisconsin's Tyranena is a kind of wild-card. They don't seem to get much notice or notoriety, but they've quietly been making some seriously worthy beers over the past few years. This is a big, big world class beer.

Pours nearly black, w ith ruby highlights. Head is thick and sudsy, and tan in color. Lace is loopy and erratic. Aroma? I get spicy pepper and cocoa. There's a little smoke in there, too, somehow. Very nice! Body is silky smooth, and very nice. Plenty of cocoa and smoke in the taste. The chipotle pepper comes in later near the finish, but remains subtle, and only adds to the distinctive and unique flavor profile.

A very delicious and complex porter with nuance and high drinkability. Recommended!