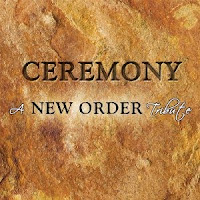 Featuring a host of artists who, for the most part, I'm unfamiliar with, this extended-length double-album is a tribute to one of the most influential electronic/pop acts ever, and is dedicated to famous Factory Records founder/New Order manager Tony Wilson. A portion of the proceeds from sales go to the Salford Foundation Trust's Tony Wilson Awards, which benefit the education and nurturing of school-age artists. So you get a good cause, and a good set of tunes! That aside, the moody dance-pop of New Order's classics emerge fresh and re-imagined here, with a selection that balances comfortably between indie rock and club techno (both of which New Order pioneered back in the early 80's). Standouts include Yes But No (consisting of 10-and-13-year old sisters Brianna and Skylar Ward) and their splendid and faithful version of  the resonant "Ceremony", The Dark Romantics' U2-like "Crystal", Christian Webb & Adam Knowles' lovely "Run" (what an amazing song), The Sheaks' dusky Western-shoegaze take on "Ceremony" (Can you tell this is one of my favorite New Order songs?). Other notables include Light Yourself On Fire, who shockingly convert  "Chosen Time" into a growly metal monster, Xoxo's solemn "Every Little Counts", and Win Win Winter's plaintive piano-driven "Regret". And that's not to mention a spoken intro from Peter Hook (of New Order) himself. So, you have some radical reinterpretations, plenty of (true?) faithful covers, and plenty of reverential and respectful tributes. A superb set for any New Order fan, and plenty of solid material for novices just as well. (24 Hour Service Station)